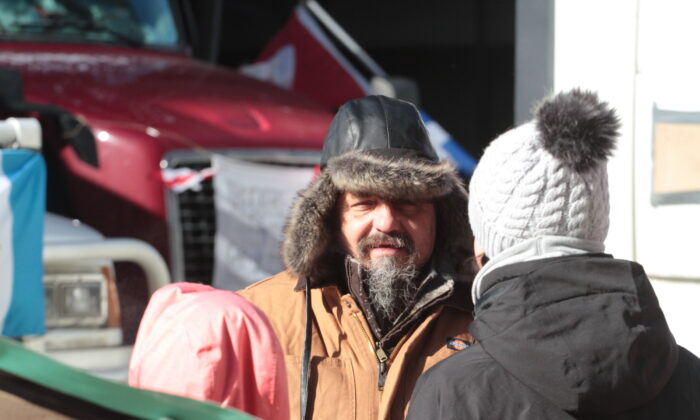 A trucker talks with a supporter in Ottawa, Canada on Feb.14, 2022. (Richard Moore/The Epoch Times)
Canada

GiveSendGo Says Some Donations Sent to Truckers, Rest in ‘Undisclosed US Bank’

The crowdfunding company GiveSendGo still has some of the money people donated to the Canadian trucker convoy protesting against COVID-19 vaccine mandates, the company said on Feb. 18.

GiveSendGo became the preferred crowdfunding site for the protesters after another platform, GoFundMe, suddenly seized donations meant for the convoy and said the money would be shunted to unnamed charities.

After backlash, GoFundMe said it would automatically refund all of the donations but protesters urged people to turn to GiveSendGo because of what unfolded.

GiveSendGo has run into problems in recent days, though, including being hacked in mid-February.

Additionally, a Canadian court moved to freeze all donations for the convoy raised on GiveSendGo. Over $8 million had been donated; that figure is now over $9.6 million.

In its update Friday titled “Where’s the money?” GiveSendGo said many people have been asking about the donations. The truckers have received some of the funds, the company said, but not all.

The “bulk of the funds are in an undisclosed U.S. bank,” GiveSendGo said.

That was one of the steps taken to prevent the court-ordered freeze from taking place.

“Right now, the teams involved are actively discussing the legal options for getting the funds where they need to go,” the company added.

GiveSendGo did not respond to a list of emailed questions, including exactly how much of the money has been conveyed to the truckers.

The company is asking people who donated not to request a refund because the funds “will be needed for the truckers and their legal teams.”

Organizers of the convoy last gave an update on GiveSendGo on Feb. 12. Organizers said that the Canadian government did not have possession of the donations and described the court order as “a temporary block.”

“Our legal team is challenging the government’s order and we are working at ways around this,” they wrote. “The best way is to continue donating to help the truckers here on the ground and not request a refund. We thank GiveSendFor for their commitment to ensure that the donations flow directly to the Freedom Convoy truckers here in Ottawa.”

People have continued donating through Feb. 19.

Canadian officials have increasingly clamped down on the protests, which are aimed at vaccine mandates like the one requiring Canadian truckers to show proof of COVID-19 vaccination or quarantine when they cross back into the country.

Prime Minister Justin Trudeau on Feb. 14 invoked a state of emergency and his administration soon began freezing the bank accounts of protesters.

Critics say the moves are heavy-handed and could have long-lasting repercussions.

On Friday, police officers in Ottawa, the main protest site, arrested over 100 people, and organizer Benjamin Dichter urged people to leave the city.