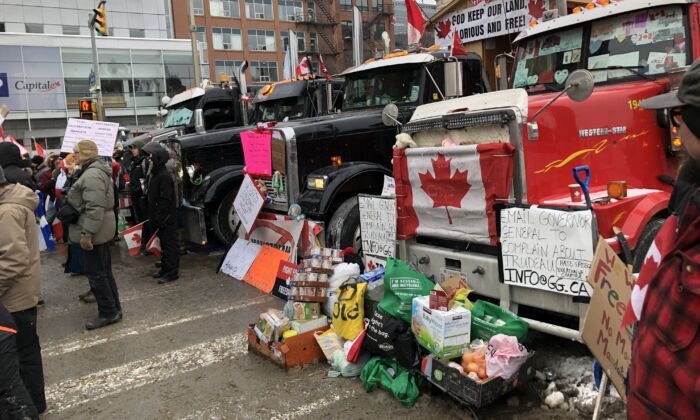 Food and necessities donated to truckers are left beside trucks parked in front of Parliament Hill in Ottawa on Feb. 6, 2022. (Noé Chartier/The Epoch Times)
Canada

GiveSendGo says no credit card information was leaked and no money was stolen after its website, which contains a fundraiser for the Freedom Convoy, was recently hacked and names of donors were made public.

“GiveSendGo has a dedicated team aggressively focused on identifying these malicious actors and pursuing actions against their cybercrime,” said the company in a Feb. 15 statement.

GiveSendGo shut down its website when the hack was discovered on Feb. 13 and says it performed security audits before going back online.

“We are in a battle. We didn’t expect it to be easy. This has not caused us to be afraid. Instead, it’s made it even more evident that we can not back down.”

Meanwhile, the website Distributed Denial of Secrets (DDoSecrets) which hosts the hacked material, posted another batch of illegally obtained information on Feb. 15.

DDoSecrets has posted leaked material on the Freedom Convoy campaign since Feb. 13 amid repeated hacks of the platform. The latest batch of donor information, titled “GiveSendGo 4.0” was posted on Feb. 15 and consisted of 5 GB of files including donor information from the “Adopt A Trucker” campaign.

In June 2020, a U.S. Department of Homeland Security document labelled DDoSecret a “criminal hacker group” after its hacking operation targeted federal, state, and local law enforcement databases in what officials surmised was in support of nationwide protests after the death of George Floyd.

Over US$8 million has been raised on GiveSendGo for the truckers’ ongoing protest against COVID-19 mandates and restrictions in Ottawa. The convoy, which began as a protest against mandatory vaccination for cross-border truck drivers, has grown into a larger movement drawing support from those who want to see an end to restrictive COVID-19 measures.

The issue of funding for the Freedom Convoy organizers has been a source of tension after authorities successfully lobbied previous platform GoFundMe to cancel their fundraiser for the convoy.

The organizers then pivoted to GiveSendGo. An Ontario court later ruled for the funds meant for the protesters to be frozen. GiveSendGo said it’s not under the Ontario court’s jurisdiction.

Before cancelling the fundraiser on its site, GoFundMe had allowed Freedom Convoy organizers to withdraw $1 million for expenses such as food and fuel for protesters.

TD Bank on Feb. 12 said it had frozen two bank accounts collectively holding over $1.4 million in deposits to support the trucker-led protests. One of the bank accounts received a lump sum of $1 million in Canadian currency via the crowdfunding platform GoFundMe, while the rest—about $300,000 Canadian dollars—was sent to a second account through several bank electronic transfers, a TD spokesperson told Reuters.

Meanwhile, while invoking the Emergencies Act over the ongoing protests, Finance Minister Chrystia Freeland announced on Feb. 14 the federal government was including crowdfunding platforms and the payment service providers they use under its anti-money laundering and terrorism financing regime.

“These changes cover all forms of transactions, including digital assets such as cryptocurrencies. The illegal blockades have highlighted the fact that crowdfunding platforms, and some of the payment service providers they use, are not fully captured under the proceeds of crime and terrorist financing act,” said Freeland.