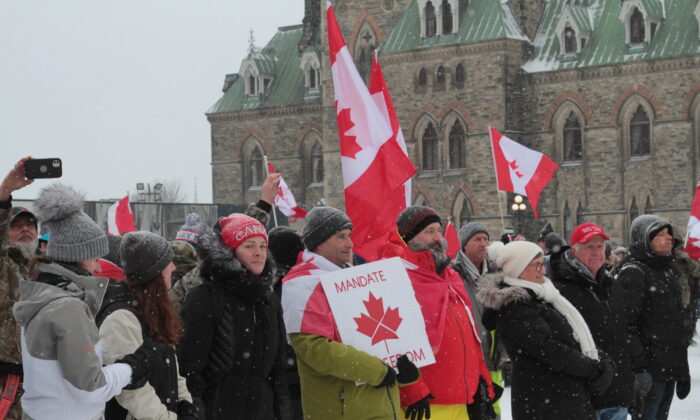 Around 50 percent of donations to the Freedom Convoy anti-mandate protests in Canada have come from small donations made from the United States, according to the crowdfunding platform GiveSendGo.

The Freedom Convoy’s GiveSendGo campaign page shows that it has raised over $9.44 million so far, meeting 58 percent of its target goal of $16 million. Over 107,000 people had contributed money to the cause, with almost 42,000 sending their prayers as of Feb. 16.

In its campaign statement, Freedom Convoy blames the Canadian government for destroying businesses and livelihoods by imposing mandates. In November, the Trudeau administration insisted that cross-border travel will require a vaccine passport, something which Freedom Envoy says is controversial and unnecessary given the shortage of truckers.

The decision drove up the cost of transporting essential items like food imported into Canada from the United States, the group said.

The confirmation comes following a hacker breach of the site and the posting information of over 92,000 individuals who donated to the Freedom Convoy campaign.

According to the hacked list, which was posted to a now-defunct website, more than 92,000 donations totaling $8 million were made through GiveSendGo. Data shows that roughly $4.3 million came from Canada while the United States contributed $3.6 million, according to the NY Times.

In terms of individual donations, the United States topped the list. One of the biggest donations of $90,000 was made by billionaire Silicon Valley entrepreneur Thomas Siebel, founder of Siebel Systems and C3.ai, an artificial intelligence platform.

Freedom Convoy had initially set up a fundraising campaign at GoFundMe and successfully raised over 10 million Canadian dollars. However, administrators at GoFundMe shut down the campaign. In a Feb. 5 update, GoFundMe said that it had evidence from law enforcement that the demonstration has become an “occupation,” with protestors engaging in violence and other unlawful activity. A Canadian judge froze Freedom Convoy representatives from accessing the donations.

The police chief of Ottawa later took credit for getting the fundraising shut down. He resigned on Feb. 15.

GoFundMe announced that it would refund all donations made by donors after initially stating it would distribute the funds to other charities chosen by the platform. The decision was changed after a widespread backlash. The truckers then moved on to set up the fundraiser on GiveSendGo, a Christian crowdfunding site.

“I think this was a huge PR mistake by GoFundMe,” Wells told Fox News. “Our platform is booming. We haven’t seen this much business. I mean, last year we grew incredibly. This year, the same pace is on 100% month over month. It’s absolutely astounding.

“People are vowing to never use GoFundMe again because of the ideological stances that they’re taking. We take a neutral position. We allow people to fundraise.” GoFundMe is being investigated by Florida, Texas, West Virginia, and Missouri for blocking and withholding donations.