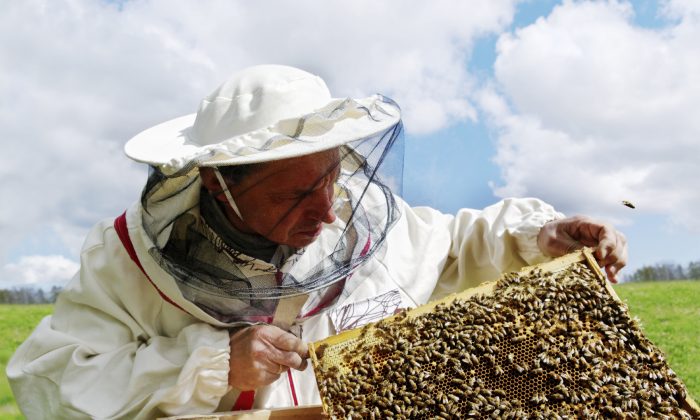 There’s no denying it: We’re in a long-term relationship … with bees. Recent evidence published in the journal Nature shows that humans have been depending on honeybees for about 9,000 years.

Researchers conducted chemical analyses of over 6,000 fragments of pottery revealing the presence of beeswax in pots in Neolithic Europe, the Near East, and North Africa, and therefore our long association with these beneficial insects.

Other than utilizing bees for honey as a sweetener and food source (the oldest pot fragment in this study was a cooking pot), beeswax served multiple purposes for Neolithic and Antiquarian people, some of which are still evident today. People used beeswax to waterproof pots, in cosmetics, for its healing properties, for rituals, and in technological applications.

How It All Began

Exactly how and when honeybees became “domesticated” by humans is unknown, but it likely began as honey-hunting, where people sought out wild bee colonies (naturally nesting in cavities) in order to harvest their honey. This practice probably became seasonal, with people returning to the same colonies to collect honey year after year.

A natural extension of this was to bring the bees closer to where humans live, and beekeeping was born.

At first, people would have moved bee colonies closer to their homes in the segments of tree that contained the cavities in which the bees lived, and this practice continues in some places in the world. However, this process of extracting honeycombs from these structures is difficult and destructive, and people began to experiment with new types of bee real estate.

In ancient Greece, pots were used as early beehives and people began to use other cheap materials, such as woven straw, to make structures (hives) in which to keep their bees.

The Modern Hive and the Birth of Commercial Beekeeping

It took until the 1800s for the beekeeper Lorenzo Langstroth to invent a beehive that allowed for easy hive manipulation and removal of honey—which is the same beehive model we use today.

The basic Langstroth hive consists of 8 to 10 (usually wooden) frames each surrounding a sheet of beeswax foundation provided by the beekeeper. The worker bees, using the wax from their own bodies, then build the walls of the cells that are used to house the developing brood, and to store pollen and nectar. The bees will eventually turn this nectar into honey.

The hives are designed so that all of the frames and the boxes that contain them are interchangeable, allowing the beekeeper to stack and move resources between hives when necessary. By adding a lid and an opening for the hive entrance (and bees of course), Langstroth bee boxes become beehives.

The uniformity of the Langstroth hive has also allowed beekeepers to transport the bees from place to place. Migration is perhaps the defining feature of modern commercial beekeeping, where beekeepers relocate their bees in order to maximize honey production and ensure the bees have proper nutrition. The modern commercial beekeeper needs a truck (ranging in size from ute to large flatbed) and has beehives on modified pallets, which they move using forklifts and cranes.

Although maximizing honey production may have been the initial reason for moving hives, the motivation for migration in many countries is increasingly to provide commercial pollination services to agricultural producers.

The most striking example of this is in the United States, where beekeepers bring their bees from all over the country to California in order to pollinate vast almond crops, which are 100 percent dependent on honeybee pollination. But bringing together the bees of nearly an entire country like this can allow for the rapid exchange of honeybee pests and parasites between usually separated bee populations.

How African Honey Bees Can Help Mitigate Global Colony Losses
Beekeeping is considered by many to be an art, with a successful beekeeper understanding such things as colony balance, seasonal requirements, and bee health.

This form of commercial pollination is one of many potential stressors that are contributing to the global bee decline. Others include pesticides, climate change, and the spread of the Varroa mite, which acts as a disease vector between honeybee colonies.

Back to Basics: The Art of Beekeeping

Many people see small-scale beekeeping as an antidote to the multitude of issues facing bee populations today (and it could help if done properly). The good news is that anybody can keep bees: You simply need to buy a Langstroth hive and the bees to live in it—and, of course, get the proper permission to keep bees on your property.

But there’s more to beekeeping than meets the eye. Beekeeping is considered by many to be an art, with a successful beekeeper understanding such things as colony balance, seasonal requirements, and bee health.

It is vital that any aspiring beekeeper learn to identify the pests and diseases that can affect honey bees and how to manage them. Some are quite infectious (to other bees) and honeybees can cover several miles while foraging, making a poorly managed hive a threat to its neighbors.

Urban Beekeeping Can Be a Sweet Hobby

Also if you choose to keep bees, be mindful that they depend on the local flora for food and may need supplementary feeding in drought, the winter, and/or when pollen is scarce. In temperate climates (think places with cold winters and warm summers, such as much of Australia), honey bees produce the most honey in the late spring/summer, when the most flowers are blooming and nectar is plentiful.

Still, the challenges faced by bees the world over are unlikely to disappear any time soon. These challenges are further magnified by the fact that the demand for honeybee agricultural pollination services is predicted to increase with a growing human global population. As an added concern, the impact of honeybees on ecosystem health is largely unknown and unstudied.

To ensure we keep these valuable insects in sufficient health and numbers to fulfill their various roles, researchers and beekeepers will need to continue to work together on how to best manage and preserve honeybees in our changing environment.

Thank you to West Australian beekeeper Tiffane Bates for her invaluable contribution to this article.

Marianne Peso is a lecturer and postdoctoral research associate at Macquarie University in Australia. This article was previously published on TheConversation.com