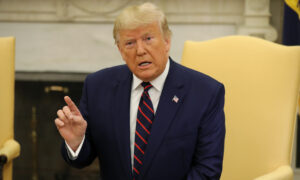 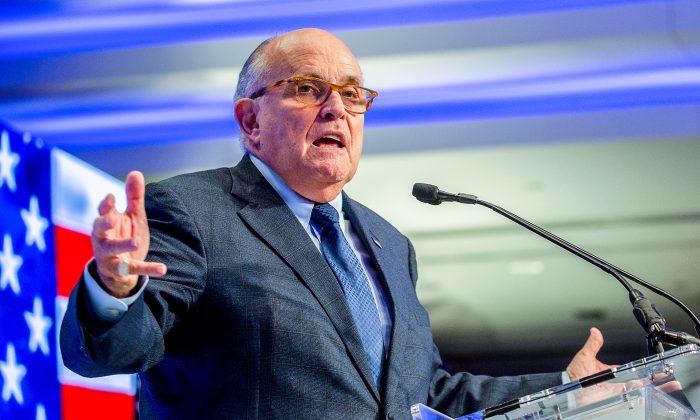 President Donald Trump’s lawyer, Rudy Giuliani, said that he has texts proving the State Department arranged meetings between him and Ukrainian officials.

Giuliani is embroiled in the impeachment inquiry launched by Democrats over a phone call Trump had with Ukrainian President Volodymyr Zelensky in July. Trump released a transcript of the call last week. Zelensky first brought up Giuliani, telling Trump that one of his assistants had recently spoken with Trump’s lawyer.

“We are hoping very much that Mr. Giuliani will be able to travel to Ukraine and we will meet once he comes to Ukraine,” Zelensky said. Trump replied that he wanted Giuliani to call Zelensky, a call Zelensky later said never happened.

Accused of improperly getting involved in foreign affairs as a private citizen, Giuliani has repeatedly spoken out in recent weeks. On Oct. 3, he posted a series of text messages he claimed showed State Department personnel arranging meetings for him with Ukrainians.

Many of the texts were from Kurt Volker, the U.S. special envoy to Ukraine, Giuliani said. The contact was labeled “KV” and the messages purportedly from Volker were signed alternatively “Kurt Volker,” “Kurt,” and “Kurt V.,” according to screenshots Giuliani posted on Twitter.

Volker, who stepped down last week, was sitting for a deposition in a closed House Intelligence Committee meeting on Thursday.

A text from July 15 appeared to show Volker asking if Giuliani, the former New York City mayor, was “back stateside” because he wanted to “talk or get together.” After receiving no response, Volker inquired again and Giuliani said he’d be in Washington shortly.

Messages Giuliani posted without the date showing had the number that was purportedly Volker asking the attorney to “send dates when you will be in Madrid.”

“I am seeing Yermak tomorrow morning. He will come to you in Madrid,” the text stated.

Andriy Yermak is a top aide to Zelensky.

Giuliani posted another undated text with multiple people in the conversation that he said showed forward progress in Ukraine-American relations because of him.

“This shows I immediately moved it forward in a positive way for them. They hardly were trying to control me because I was damaging their objective. In fact I was furthering it. Let’s see how Crooked Dems and Corrupt Media twist this?” he wrote on Twitter.

Let’s see how crooked Dems and their Corrupt Media can twist a lawful process and make false and defamatory attacks on people. By doing it in secret they are creating a false sense something is wrong. That’s why I put out some of my texts. All at request of and reported to State.

He also posted an Aug. 7 message from a person he said also worked at the State Department. The person said they’d spoken to Volker, who gave him a “Zelensky update.”

“I have been in touch directly with Zelensky as well,” the person wrote. “You able to meet in NY or DC Mon morning? I have some EU issues to discuss.”

“Volker should not be made a scapegoat. This is second State Department Ambassador obviously as aware and involved in asking me to do it as Kurt. They did nothing wrong,” Giuliani said.

Giuliani has been subpoenaed by House Democrats as part of their impeachment inquiry. He has said he has not decided sure if he will comply.