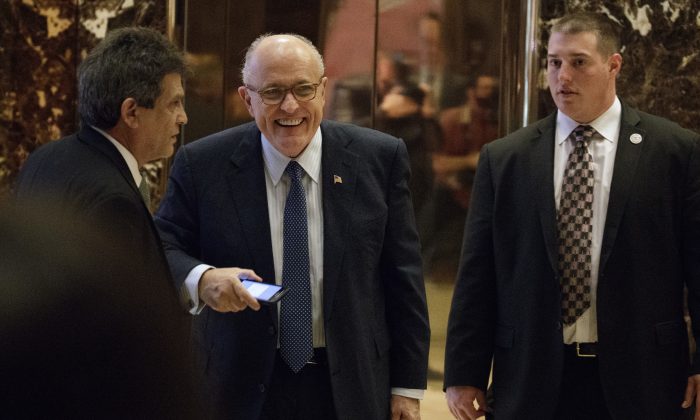 WASHINGTON—A top adviser to President-elect Donald Trump says it would be “unrealistic” to purge his children from his businesses and hand their control over to an independent trustee.

Appearing on televised interviews on Sunday, Giuliani initially said Trump should set up “some kind of blind trust.” When pressed, Giuliani told CNN’s “State of the Union” that Trump’s unusual situation might call for more flexibility than a traditional blind trust and involve his three children.

“I think he’s in a very unusual situation,” Giuliani said. “He would basically put his children out of work” if he didn’t involve them, Giuliani said.

He says the children would then have to “start a whole new business and that would set up … new problems.”

Giuliani said Trump’s three adult children—Ivanka, Donald Jr. and Eric—who are involved in his businesses would not advise Trump once he becomes president in January. All three children are, however, are on the executive committee of Trump’s transition team.

Giuliani said after the inauguration “there will have to be a wall” between Trump’s children and Trump “with regard to government matters.”

One possibility to separate Trump from his businesses without removing his children would be a “legal or clear document that meant that he would not be involved, he would have no interest in it, he would have no input into it, (and) he would just have a passive interest,” Giuliani said.

Trump’s vast corporate empire could lead to questions about potential conflicts of interest—that decisions he makes as president could benefit him and his family financially unless a traditional blind trust is created.

Trump has a direct stake in more than 500 companies, according to his disclosures with the Federal Election Commission. The full extent of his holdings and income are still unclear because the president-elect refused to release his tax forms, saying that they are being audited by the IRS.

Besides Trump’s hotels and golf courses in the British Isles, the president-elect has a licensing deal with a firm based in Indonesia. The names of his companies indicate that he has businesses tied to Brazil, Canada, Israel, Dubai, Egypt, India, the Philippines and South Africa. His menswear line famously had neckties sewn by contractors in China.

During the campaign’s final stretch, Giuliani emerged as one of Trump’s closest advisers and regular traveling partners. The former New York mayor and federal prosecutor is a possible fit in the Trump administration for a post such as attorney general.