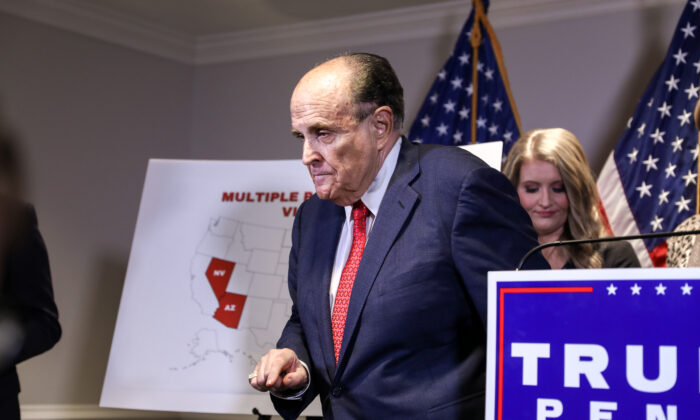 Giuliani said the reason is because he gave a speech at The Ellipse in Washington on Jan. 6.

“I am a witness and therefore unable to participate in court or Senate chamber,” he told ABC News.

Trump was impeached last week over allegations he incited the storming of the U.S. Capitol. The beginnings of the breach were unfolding as he spoke about two miles away at The Ellipse, a park in downtown Washington.

Giuliani, who hasn’t responded to requests for comment, had claimed on Jan. 15 that he was “involved” with preparing Trump’s defense. But a campaign spokesman said Trump “has not yet made a determination as to which lawyer or law firm will represent him.”

The House Judiciary Committee announced last week it has retained lawyers Barry Berke and Joshua Matz to support the impeachment efforts. Both took part in Trump’s first impeachment trial, which culminated with the Senate acquitting the president.

Impeachments trigger a trial in the Senate. Members decide whether to acquit or convict on the charge or charges, in this case, incitement of insurrection. A two-thirds vote is required to convict.

Since House Speaker Nancy Pelosi (D-Calif.) hasn’t transmitted the impeachment article to the Senate, a trial can’t start yet. The Senate is out of session but is scheduled to reconvene on Jan. 19.