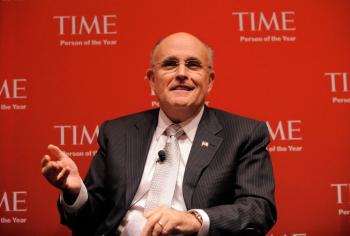 Former New York mayor Rudy Giuliani speaks at the TIME's 2009 Person of the Year at the Time & Life Building on Nov. 12 in New York City. (Jemal Countess/Getty Images for Time Inc)
US

By Evan Mantyk
Print
NEW YORK—Former New York City Mayor Rudy Giuliani is not going to run for governor in 2010 and may instead seek the New York Senate seat vacated by now U.S. Secretary of State Hillary Clinton, according to anonymous sources cited in various reports on Thursday.

“Rudy has made it clear in recent days that he's not going to run for governor,” said a senior New York Republican official, according to the Post. Similar sources were cited in the New York Times and NY1 News.

Giuliani likely feels intimidated by Attorney General Andrew Cuomo, who is believed to be planning to run. Cuomo is polling well ahead of Giuliani and current Democratic Gov. David Paterson.

The Post recently reported that Cuomo sent Giuliani a private message indicating he would definitely run for governor in 2010.

Despite goading from President Obama, the unpopular Gov. Paterson has said that he would run again and former Long Island Congressman Rick Lazio, a Republican, has said that he is running, though he currently comes in last in the polls.

An aide to Giuliani has insisted that reports indicating he is not running for governor are "premature," according to NY1 news.

"While governor is the race that most people have associated his name with, there is an important responsibility for the party to find a strong United States Senate challenger," said Erie County Republican Party Chairman Jim Domagalski, according to NY1.