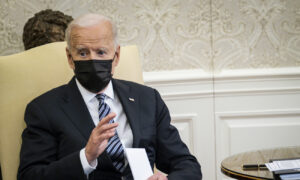 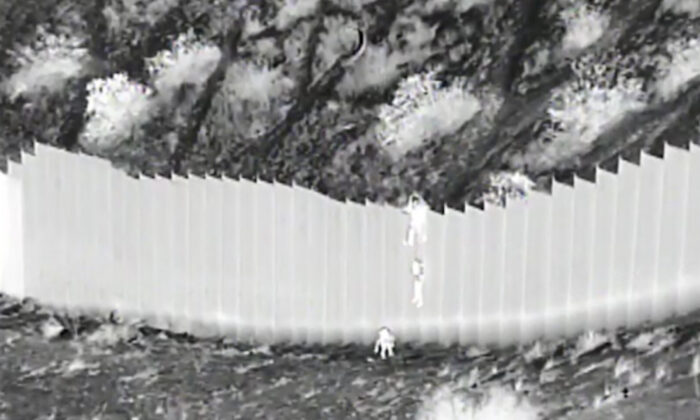 Video screenshot shows a human smuggler dropping a child over the U.S. border wall in the desert in New Mexico, in a file photo. (U.S. Customs and Border Protection)
Immigration & Border Security

Girls Dropped Over Border Wall by Smugglers Reunited With Family

Two Ecuadorian girls who were dropped from a 14-foot-high barrier at the U.S-Mexico border by smugglers near El Paso about a month ago have been reunited with their families.

“The Ecuadorian minors aged three and five, who were abandoned by human traffickers on the border between the United States and Mexico, were finally reunited with their family on April 17,” Ecuador’s Ministry of Foreign Affairs and Human Mobility wrote in a statement.

“The Foreign Ministry ratifies its commitment to continue working—in coordination with the competent institutions—for the prevention of risky migration of Ecuadorian citizens, especially children and adolescents,” the statement reads.

After the late March incident, the girls were located by border agents and placed at a temporary holding facility in Texas, reported AP News.

The Ecuadorian consulate in Houston said on April 2 that the children were safe, uninjured, and that their parents were contacted.

In the San Diego sector, Chief Patrol Agent Aaron Heitke published a distressing video of a smuggler dropping a 2-year-old child from an 18-foot high border wall to the child’s father, who was standing at mid-altitude on a concrete structure.

Heitke said that the incident occurred on Sunday and that, luckily, the child wasn’t hurt.

“Sunday, #BorderPatrol agents witnessed a smuggler drop a two-year-old child from atop the 18-foot-high border wall into the arms of the child’s father,” wrote Heitke. “This event could have been catastrophic. Luckily, the child was not injured.”

Sunday, #BorderPatrol agents witnessed a smuggler drop a two-year-old child from atop the 18-foot-high border wall into the arms of the child’s father. This event could have been catastrophic. Luckily, the child was not injured. pic.twitter.com/5uDEtbs8NW

U.S. Customs and Border Protection released an operational update on April 8, which stated that more than 172,000 illegal immigrants were apprehended in March along the Southwest border.

Compared to February, March has seen a 100 percent increase of unaccompanied minors from Central America—18,890, the agency stated.