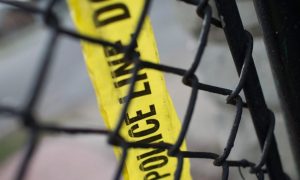 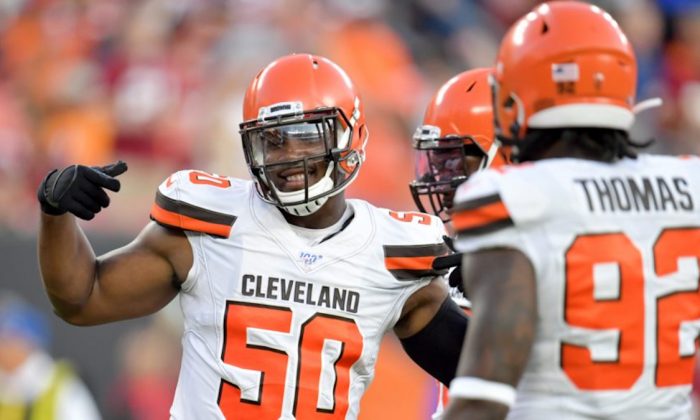 Defensive end Chris Smith #50 of the Cleveland Browns celebrates during the first half of a preseason game against the Washington Redskins at FirstEnergy Stadium in Cleveland, Ohio, on Aug. 8, 2019. (Jason Miller/Getty Images)
Crime and Incidents

The girlfriend of Browns defensive end Chris Smith was killed in a roadside accident that happened after his car spun out on the highway. It happened just four weeks after she gave birth to their daughter.

The team said Petara Cordero, died when she was struck by an oncoming car on I-90 West at around 2 a.m. Wednesday. Cordero was a passenger in Smith’s Lamborghini, which had a tire malfunction and he struck the median wall.

Cordero exited the vehicle and was standing on the road’s shoulder when a car driven by a 47-year-old woman smashed into the passenger side of Smith’s car.

According to a Cleveland police report provided by the Browns, Cordero was transported to Fairview Hospital and pronounced dead.

Last Sunday, 27-year-old Cleveland Browns’ defense end Chris Smith expressed his joy over his current life. He said how blessed and grateful he was. His girlfriend Petara Cordero, 26, was at his side with their newborn daughter Haven Harris, Cleveland.com reported.

Because the players were free on Wednesday Petara had come over with Haven from Charlotte, North Carolina to spend some time together, according to the outlet.

The 47-year-old woman later admitted to police that she had been drinking. She was treated at the Fairview Hospital and later released. The matter is still under investigation, and as yet no charges have been filed but a toxicology report is pending.

Smith was unharmed. It is not clear whether his daughter Haven was in the car at the time of the accident.

“Words cannot describe the sorrow we feel for Chris following the loss of his girlfriend, Petara.”

The team owners, Dee and Jimmy Haslam, released a statement on the Browns’ website: “Words cannot describe the sorrow we feel for Chris following the loss of his girlfriend, Petara.

“Our entire organization mourns with Chris, his family, and the Cordero family. We will do everything possible to offer them our support, comfort, and any resources in this most difficult time.”

Cleveland’s players were told of the accident during a meeting and coach Freddie Kitchens visited Smith at his home.

There’s much ado lately with the Cleveland Browns team.

Recently, the NFL told Odell Beckham Jr., who played his first game with the Cleveland Browns last Sunday, not to wear a $350,000 watch during games.

Browns coach Freddie Kitchens stated that he didn’t know Beckham was wearing it.

On Monday, Sept. 9, the NFL reached out to Beckham and asked him not to wear it again, the publication also reported.

The Browns devastatingly lost to the Colts, 43-13. Beckham caught seven passes for 71 yards in his Cleveland debut.

If ain’t one thing…. it’s another…

Beckham issued a statement on Twitter, but it’s not clear if it was about the watch.