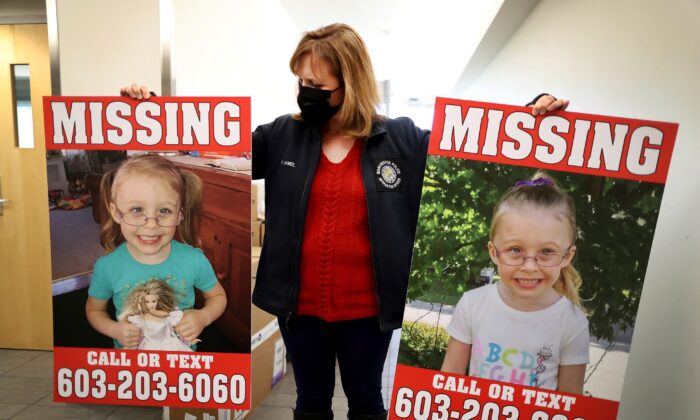 “Kelsey Small passed away on March 13th here in Manchester,” Manchester Police Public Information Officer Heather Hamel told Fox News on Friday. “While the [medical examiner] is waiting on some tests to come back, her death is not considered suspicious.”

An online obituary said that she “passed away unexpectedly,” although it provided no details about the cause of death. Small, 27, did not face charges in connection to Harmony’s case.

On Friday, the New Hampshire Attorney General’s office said Adam Montgomery was indicted on a charge of second-degree assault for allegedly hitting his daughter between July 1 and July 22, 2019, according to WMUR.

Harmony, 7, has not been seen in more than two years, officials say. A search for her is ongoing.

On Dec. 31 of last year, authorities sent out a missing child alert after obtaining information about her disappearance.

“Manchester Police received a report this week that Harmony Montgomery has not been seen since late 2019. The circumstances surrounding this prolonged absence are very concerning and are being thoroughly investigated,” said the Manchester Police Department at the time.

After she was reported missing, Adam Montgomery was taken into custody on several counts, said the attorney general’s office. Harmony’s stepmom, Kayla, was later taken into police custody on a felony count of theft by deception and two misdemeanor counts of welfare fraud, reports say.

“If someone out there has information about Harmony and they haven’t come forward yet, then you’re late,” Manchester Police Chief Allen Aldenberg told reporters on Friday, according to WMUR. “You’re late to this investigation, and you need to do so now. I know that sounds a little abrupt and a little gruff, but that’s what we need right now.”