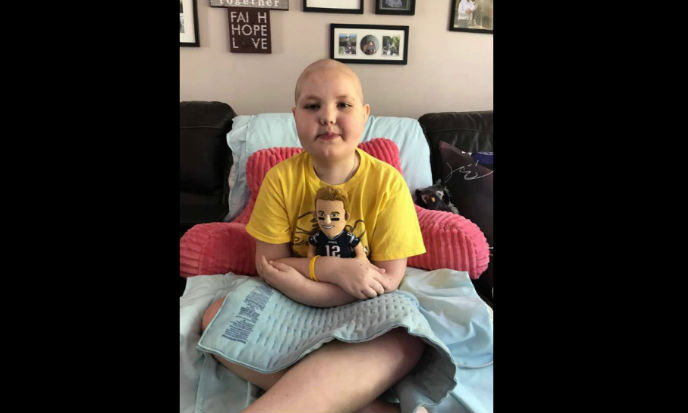 Hailey Steward was diagnosed with acute lymphoblastic leukemia at the age of 5. (Courtesy of Tabaitha Steward via Facebook)
US News

A child cancer patient who realized her dream to meet her favourite football player Tom Brady died over the weekend.

Ten-year-old Hailey Steward, who had leukemia for almost six years, died at Barbara Bush Children’s Hospital in Portland, Maine, around 8 p.m. on Saturday, Sept.23. Her mother, Tabaitha Steward wrote in a post on Facebook: “Our beautiful girl went to Jesus.”

Patriots quarterback Tom Brady granted Hailey’s wish for Christmas in 2015, when he sent Hailey a video inviting her to visit him in Foxborough. Hailey was diagnosed with acute lymphoblastic leukemia in 2012 when she was 5 years old.

A post on her mother’s Facebook page, that follows Hailey’s journey, said that spending a day with Tom Brady was the “highlight of Hailey’s life!”

In the video sent to Hailey, the NFL star said: “I heard you had a special Christmas wish that you wanted this year, and I’ve got one, too. I was hoping you’d be willing to come down here this Saturday before we leave for New York, and I get a chance to meet you.”

The football player reached out to Hailey after reading an article in the Press Herald. The article described the little girl decorating her room with Tom Brady memorabillia. Before going to sleep, Hailey said how she “hates the [Philadelphia] Eagles” and that her favorite school subjects are gym and lunch, the report said.

“As a Dad this was truly one of the most amazing days of my life to see my girl get her wish,” wrote Hailey’s father John Steward on Facebook.

Messages from friends, family, and supporters poured on to Tabaitha Steward’s Facebook page on Sunday and Monday.

“We are sad, but Hailey gave us purpose, a mission. She wanted us to “Just do It”. Hailey, we will… Godspeed sweet butterfly!”

Thousands of residents in the town of Bethel were inspired by her courage, said the Bethel Sun Journal.

“Hailey was an inspiration to me personally when I was initially diagnosed with cancer,” Julie Driscoll said to the news outlet.

Hailey’s family created a nonprofit company called Hailey’s Hugs to support children who are diagnosed with cancer. In 2015, the organization raised $12,000 to buy 30 refrigerators for the child patients at Barbara Bush Children’s Hospital.

Tabaitha Steward wrote in a Facebook post on Monday, “There’s so much hate in this world and I wish she could have touched everyone’s heart because she would of had them under her spell and there would be more love in this world!”

She ended the post by writing, “the most important one of them all is no matter how different we are we are all family.”