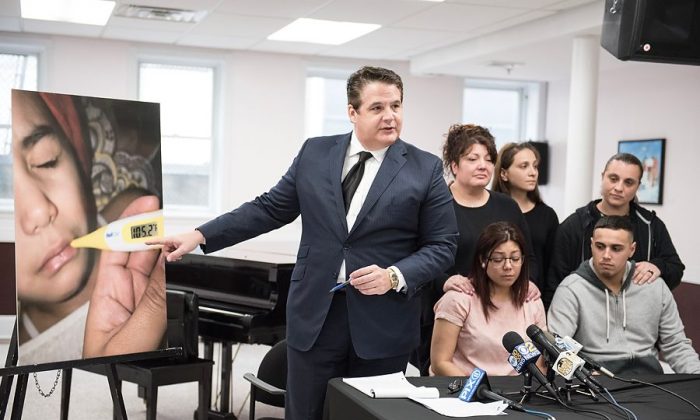 Lawyer Louis Zayas points to a picture taken of Nevaeh Hernandez when she was sick with the flu.
US News

But instead of enjoying the show with the beloved 6-year-old, Conteron and her grieving family are preparing for the girl’s funeral this weekend.

Nevaeh Hernandez, a kindergarten student at Lincoln School, is the second child in New Jersey to die of the flu this season and her family says her tragic death likely could have been prevented, had she not been sent home from the hospital with a fever near 104 degrees.

The 6-year-old came home from school Friday afternoon and said she had a headache, family attorney Louis Zayas said during a press conference today. Nevaeh’s mother, Stephanie Conteron, gave her daughter some medicine but soon noticed her temperature began to rise. She took her to Hoboken University Medical Center that night.

After more than three hours, Nevaeh was seen by a nurse and a physician’s assistant and was told both strep throat and flu tests came back negative, Zayas said, adding that she was sent home despite having a high fever.

Conteron, an emergency medical technician, knew something was still wrong Saturday. Navaeh’s temperature spiked to over 105 degrees and her family brought her to Hackensack University Hospital where she was diagnosed with the flu within an hour of arriving, Zayas said.

There, the girl had four seizures, slipped into a coma, and died Monday, the attorney said.

Navaeh’s father, Gabriel, is in the Army and was stationed in Germany. He was rushed home, escorted to the hospital by police, but didn’t make it back in time to see his daughter before she died.

“The purpose here is to alert the public how dangerous this flu strain is, that even if your child has been given the flu shot, that this flu shot may not be sufficient to warn off this particular strain,” Zayas said.

Navaeh was given the flu shot in December, her family said.

Sandra Rivera, the 6-year-old’s maternal grandmother, is now reminding parents they have a right to ask for a doctor to see their child and to stay at a hospital until they feel they have received the best care.

“Only a parent knows how your child is feeling,” Rivera said. “Stay there, request whatever you need. Ask for a doctor, (say) ‘I don’t feel right, I’m not going anywhere,’ because we feel (Navaeh’s) death could have been prevented”

CarePoint Health, which operates the Hoboken hospital, said in a statement it will be cooperating with the state’s mandatory review of health records and lab testing, which is required for pediatric flu deaths.

“We join the entire Hudson County community in mourning the tragic death of Nevaeh Hernandez,” spokeswoman Jennifer Morrill said. “Our heartfelt condolences go out to her family and friends. While privacy laws strictly prohibit our commenting on individual patient conditions, testing, or treatments, Hoboken University Medical Center meticulously follows all CDC guidelines and protocol related to the flu or possible flu cases.”

But as Nevaeh’s family searches for answers, her mother says she’s really missing the sassy, intelligent little girl who had every Disney princess dress and loved going to her ballet class.

“She would knock on the door while I was in the bathroom, telling me that she loves me, and then coming back five minutes later to tell me she loves me and ask if I’m okay in there,” Conteron said.

A wake is scheduled for Friday from 2 to 8 p.m. at Vainieri Funeral Home on Kennedy Boulevard in North Bergen. Those attending are asked to wear pink, Nevaeh’s favorite color. A funeral service will be held Saturday at St. Augustine Church in Union City at 10 a.m.