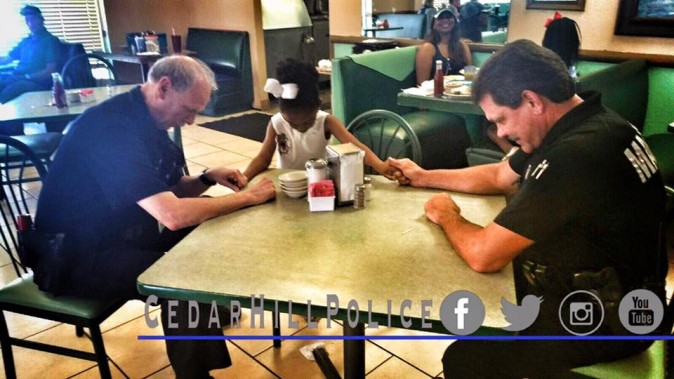 Two Cedar Hill Policemen were on their lunch break when a little girl approached them.

Cedar Hill Marshal’s Herron and Wallace were about to eat lunch at a local restaurant when Chloe, 5, came to their table and asked them if she could pray with them right before they eat their food.

According to the Cedar Hill Police Department (CHPD), Marshals Herron and Wallace admitted that they had never had anyone pray with them before, adding that Chloe’s prayer was beautiful.

Chloe’s father captured this moving photo of the officers holding hands with Chloe as they joined her for a short prayer. He later sent the picture to Cedar Hill Police Department, which posted it on its Facebook page.

“Our thanks to him for sharing this act of compassion with us,” CHPD wrote on Facebook.

The picture has since been shared over 4,000 times.

“I have no idea where this place is, I live in Kansas City, Missouri. This story brought tears to my table here at a local restaurant,” commented Facebook user John Pickett. “Makes me want to pack up & move to your town. She is a great ambassador for your town.”