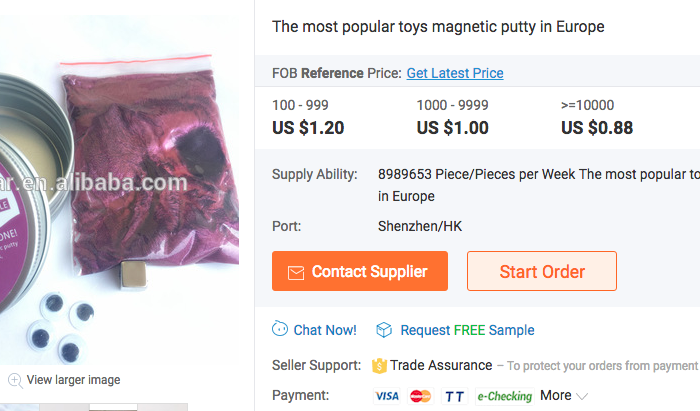 A U.K. mother has claimed her daughter suffered arsenic poisoning after playing with Magnetic Putty bought from Amazon.

Frances Kelly bought the toy, which consists of putty and a magnet, as a Christmas gift for her daughter Neve.

According to Kelly’s Facebook post, Neve had been playing with the toy since Christmas and Kelly’s sister warned her about the product in January. Kelly and her husband Mark then took Neve to the doctor for testing “purely as a precaution.” However, test results revealed that she had 10 times the normal level of arsenic in her urine.

Kelly said that Neve’s blood has been sent to a specialist for further testing, and the family is now awaiting test results.

According to the BBC, Amazon removed the toy from sale in January.

A U.K. regulator, Northamptonshire Trading Standards, also barred the sale of the product in January, after it was found to contain seven times the permitted level of arsenic.

The Northamptonshire Trading Standards Service said the magnet was 29 times over the allowed magnetic force and could be “easily swallowed,” reported BBC. In addition, it had twice the amount of lead allowed.

The manufacturer or the importer was not identified on the product label, said the U.K. standards body. However, product listings on Alibaba.com’s wholesale marketplace, suggest it is manufactured in China.

According to the Daily Mail, the product is still available to buy in the U.K. from some online retailers.

The product is also currently sold by some online stores in the United States.

The Kellys said they are now considering legal advice regarding next steps and will await further test results before making further comment.

Frances Kelly took to Facebook on Thursday, Feb. 15, to warn parents about the product.

She said, “We have received shock news this afternoon with the results of my daughter Neve’s tests. There were 10 times the normal level of arsenic found in her urine. They had to take vials of blood and is getting sent to the arsenic specialist in Glasgow. So please if you have this product get your children tested … Neve thankfully didn’t have much contact with it but this product is lethal and should be made aware to anyone that has been in contact with it.”

Mark Kelly added in a comment that Neve had only played with the putty “a couple of times” before being tested.

“The skin is not absorbent enough to cause Neve’s elevated levels, so she may have played with it and ate something without washing her hands and that’s how it has got into her system,” he said. The worry is that there are kids who have played with it a lot more, for longer periods and are perhaps oblivious that it could be dangerous.”

“If you have this product then I urge you to get the people concerned to the doctor, just as a precaution,” said Mark.

In the most recent post on Feb. 15, Francis said: “Neve is doing well we are in the process of waiting on test results. We have now sought legal advice and can’t comment on anything until we have the results. The media who have been contacting us and visited our family we can’t give any more information than what was in my post at this minute. My main reason was to ensure the safety of others after receiving this shocking news.”