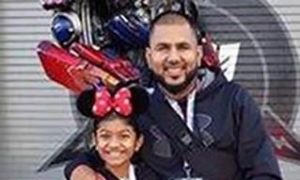 MARKHAM, Ont.—A five−year−old girl who was the subject of an Amber Alert north of Toronto on Tuesday, March 19, was found safe after a few hours.

York regional police said the girl’s father was taken into custody but they do not know if he has committed a criminal offence as the investigation continues.

Police had issued the alert Tuesday afternoon after the girl was allegedly taken from her classroom in Markham, Ont., by her father.

Jaffri, 25, is described as having brown skin, average build, standing at 6-foot-1 with short brown hair and a tattoo on his right arm that says “Jannah” while wearing a navy blue dress coat and black cargo pants.

Police looking for 5-year-old Jannah Jaffri after they say her dad 25-year-old Soloman Jaffri walked into her classroom at Armadale Public School in #Markham today & abducted her. @YRP say Jaffri is not supposed to have access to the child. Last seen getting into a mini-van taxi pic.twitter.com/D7GZ3TOCZd

Police said he was not supposed to have access to his daughter and investigators received some information that caused concern.

“The child was reported missing, we knew that the father came to pick her up, we had information that he was not supposed to have access to her at that time, so we were essentially dealing with it to make sure that we found her and we could find out that she was safe,” police spokeswoman Const. Laura Nicolle said.

“Certainly it was a very big concern for us to find her quickly and we’re very, very relieved, obviously, to find out that she’s safe.”

A wonderful outcome to this #AmberAlert. Here’s Const Laura Nicolle from @YRP on how Jannah Jaffri was found safely. It’s still unclear if her father Soloman will be charged. I’m told police are still investigating pic.twitter.com/8vzW4zqMGw

Police said the pair was picked up by a minivan cab and dropped off at a second location, where they got into another vehicle.

This is the mall parking lot off New Delhi Drive where Soloman Jaffri and his 5-year-old daughter Jannah Jafri were last seen getting out of a minivan taxi and transferring to another vehicle. A number of @YRP vehicles just left in a hurry #AmberAlert pic.twitter.com/dnx1FO23IL

Nicolle said the two were found just before 6 p.m. near the second location, after someone saw them in a business and recognized them from photos shared through the Amber Alert.

She said police had been scouring the area with helicopters, canine units and patrols in search of the pair.

On scene at Armadale Public School where @YRP say Jannah Jaffri was last seen. Heavily police presence here. An #AMBERAlert has now been issued for the child pic.twitter.com/pRBiNXZcEW