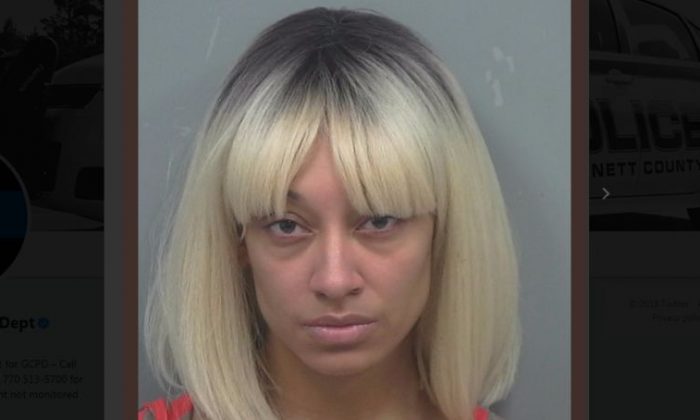 A Georgia mom, Devin Moon, is accused of neglecting her 2-year-old daughter who starved to death while she worked overnight shifts at a club, according to police on Friday. (Gwinnett County Police/Twitter screenshot)
US News

A Georgia mother is accused of neglecting her 2-year-old daughter who starved to death while she worked overnight shifts at a club, according to police.

The Gwinnett County Police Department said that Devin Moon, 29, called the police Tuesday after finding her daughter, Reygan Moon, “was unresponsive and cold to [the] touch.”

When officials arrived on the scene, they found the girl dead. “Reygan Moon was determined to be deceased at the scene. She was 2 years and 11 months old,” according to police in a news release.

Moon told detectives that the girl was born with “medical issues” that prevented her from gaining weight. After an autopsy, they discovered that the girl’s cause of death was neglect from malnutrition.

GCPD has arrested Devin Moon for first degree cruelty to children and felony murder. The victim was her daughter, who was 2 years and 11 months old. pic.twitter.com/dGa6aVagI4

The girl weighed half the normal weight of a girl of that age, according to the U.S. Centers for Disease Control and Prevention’s growth chart. The girl weighed 14 pounds, said police

“The investigation revealed that Devin left her daughter home alone most nights while she went to work. Devin had previously been reported to DFCS [Division of Family and Children Services] by her family, who were concerned for Reygan’s well-being. Devin cut off contact with her family members as a result. They had not seen Reygan in about a year,” according to police.

Gwinnett County Police Sgt. Jake Smith told 11 Alive that Moon left her daughter alone while she worked, and investigators believe that she was a dancer at a club.

“During the investigation detectives found that she had been leaving the child to go work basically overnight shifts on a regular basis,” he told the station. “So the [child] really was left at home alone for 10-12 hours most nights.”

Moon was later arrested and remains in custody at the Gwinnett County Detention Center without bond, said police.

Moore was arrested and charged with cruelty to children in the first degree and felony murder, 11 Alive reported.