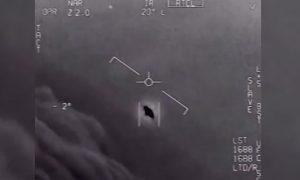 Navy Pilots Recall UFO Encounters: 'There's Something out There That Was Better Than Our Airplane'
0
Share Now
TelegramFacebookTweetEmailTellMeWeReddit
Copy Link

Officials in a Southern California city say a teenage girl attacked a church elder, killing him, before taking his vehicle.

The victim was identified as Willie Hunter, 79, the church minister and elder, CBS Los Angeles reported. Hunter apparently knew the 16-year-old girl, who was not named.

Sheriff’s deputies went Hunter’s home in Apple Valley, Calif., after getting reports that he wasn’t seen in several days.

They entered his apartment, discovering his body.

Investigators then determined that the suspect knew Hunter and was at his apartment when an altercation broke out before the suspect stabbed him several times, killing him.

Later, the identified the suspect as the 16-year-old girl.

NBC Los Angeles reported that the girl then took off with his car.

The teen was arrested and booked as a juvenile for murder on Sunday.

“He was a stand-up man,” said Anthony Brandon of Hunter, who was a reverend at United Church in Christ of Apple Valley, ABC7 reported.

“A real man of God. Loved the word, loved the Lord. Had no enemies. Was always nice to everybody. Give you the shirt off his back,” Brandon continued.

The San Bernardino County Sheriff’s Department said that anyone with information should call Detective Justin Giles at (909)387-3589. Anonymous tippers can contact the We-tip Hotline at 1-800-78-CRIME (27463) or www.wetip.com.