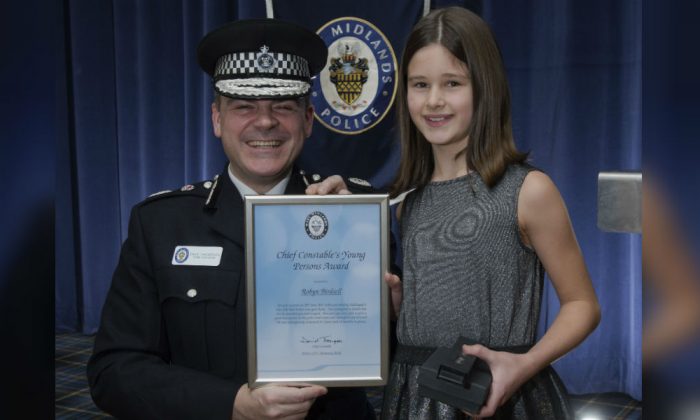 Girl, 10, Recognized for Her Bravery After Chasing a Burglar From Her Home

A middle school girl who went after a man taking valuables from her home is being honored for her bravery by the UK’s West Midlands Police.

Robyn Birdsell was returning from a swimming lesson with her mom last June when she saw a thief stuffing the family’s valuables into her backpack at her home in Birmingham.

After hearing them come back, the thief took off with the stuff, and without thinking, the 10-year-old chased after him yelling “give us our stuff back.”

The thief tried to climb over the garden fence, but Robyn grabbed his leg and pulled him back.

The thief twisted her arm and managed to get away “but Robyn had the last laugh,” the West Midlands Police Department said in press release.

“Her evidence and detailed description of the offender helped West Midlands Police detectives trace him and secure a jail term of almost four years,” they said.

They described the 31-year-old as a “prolific thief with a string of convictions.”

“What Robyn did was quite an incredible feat of bravery for one so young…someone had broken into her home and she wasn’t going to give up her possessions lightly,” Thompson said in a release. “I have no doubt that if she chose a future career in policing she would be a huge success!”

Over Christmas, the West Midlands Police surprised Robyn and her sister by pulling their mother over and telling her that they were looking for a car in the area that matched hers.


When she pulled into the police station, instead of having their car inspected, Robyn was presented with a gift—a new backpack—by Birmingham Police Commander Kenny Bell.

And possibly the best present of all was the future K-9 officer puppies that she and her sister got to play with—with the promise that she would be able to visit the dog training center in Balsall Common and pick one to have named after her.

“It was an amazing surprise and we loved meeting the police dogs,” Robyn said, according to the West Midlands Police. “I’m really excited about meeting the new puppies.”