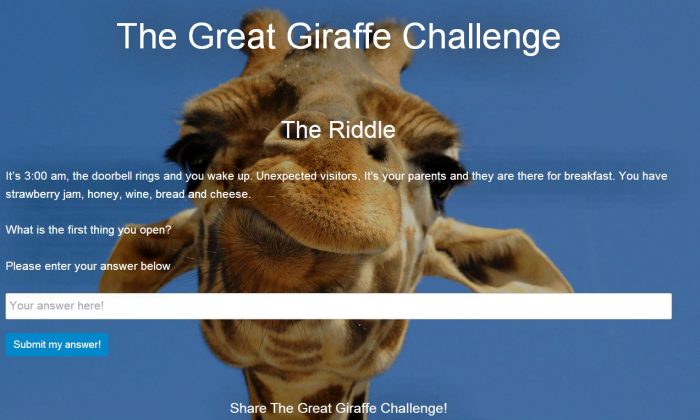 Giraffe Riddle Answer: Is it ‘Door’ or ‘Your Eyes’?

A giraffe riddle is sweeping Facebook, and the creator of The Great Giraffe Challenge promises more riddles each week. And no, the creator is not the hacker group Anonymous, according to a hoax that has spread in tandem with the riddle.

“It is taking the web by storm – it is insane. Thank you for taking part and sharing it with your friends,” Strugnell told The Mirror, adding that he is shocked by how popular it has become.

The riddle reads: “It’s 3:00 am, the doorbell rings and you wake up. Unexpected visitors, it’s your parents and they are there for breakfast. You have strawberry jam, honey, wine, bread and cheese. What is the first thing you open?”

There have been unsubstantiated reports that the Anonymous hacker group or others are using the riddle to spread malware to gain access to users’ accounts and data, but this is unsubstantiated.

On social media sites, users made jokes about what they would do.

“At 3 am, the last things I would open are my eyes and the door,” wrote a top commenter on CNN’s website.

Others noted that since it’s a riddle, there’s a “trick” to it.

“That’s the ‘trick’ of the riddle. It never says you know it’s your parents. It simply states the fact that it is your parents,” wrote another.

According to the Chicago Tribune, “two acceptable answers have surfaced.”

The riddle’s answer is “the door” but “your eyes” is also an acceptable response.