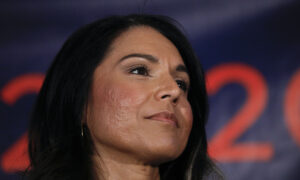 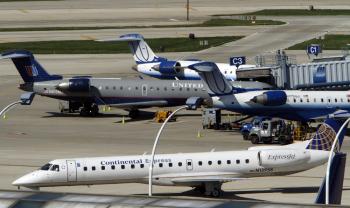 Continental and United Airlines jets taxi to and from the gate at a gate at O'Hare International Airport May 3, 2010 in Chicago, Illinois. (Frank Polich/Getty Images)
US

By Ian Ritz
Print
Ginger McGuire spent a little more time than expected in an United Airlines jet after falling asleep during what should have been a short layover near Washington, D.C. She was locked in the grounded plane alone for four hours.

McGuire fell asleep on Flight 8080, which was heading from Detroit to Dulles Airport in Virginia, 26 miles from Washington, D.C. Flight attendants did not wake her after landing. The plane was locked and McGuire woke up alone, in the dark, and unable to get out of the plane, reported CNN.

“Waking up on an empty airplane and not being able to get out was very horrifying," said McGuire to CNN Thursday. "It's a very dramatic word, but it was a little much."

McGuire slept for the majority of the time she was locked in the grounded plane. She paced the aisles of the plane for 15 minutes before being discovered by police who wanted to know what she was doing there, the CNN report added.

McGuire, who works for a Michigan cable company, was not happy about the breach in her itinerary.

A United Airlines representative spoke with the Associated Press saying that the company was working closely with representatives in Virginia to find out what went wrong at the end of the flight.

"We are working closely with our partner Trans States to investigate the cause and remedy the situation with the customer," said a United Airlines representative in a statement.