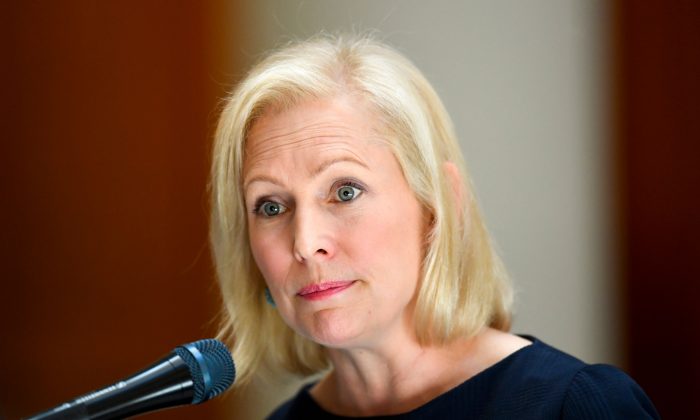 WASHINGTON—Democratic presidential candidate Kirsten Gillibrand is throwing her weight behind legislation that would have the government catalog hate crimes, something the FBI already does.

But waste and redundancy are nothing new in Washington.

What’s eye-opening about the move is that the junior senator from New York and her fellow legislative cosponsors cite information from the embattled, radical left-wing Southern Poverty Law Center (SPLC) as authoritative in justifying the proposal. Although the SPLC has come under attack from critics in recent years, the left, academia, and mainstream media generally consider SPLC data to be reliable.

The center promotes something called the “Trump Effect,” which it blames for thousands of cases of prejudice, bullying, and hate crimes in the nation’s schools. The argument, thinly supported with largely anecdotal evidence, is that the election of President Donald Trump in November 2016 unleashed a tidal wave of racial intolerance, white supremacism, and related hate crimes against vulnerable members of minority groups in schools and in society in general.

Gillibrand’s bill is SB 2043, the proposed “Khalid Jabara and Heather Heyer National Opposition to Hate, Assaults, and Threats to Equality (NO HATE) Act.” An arm of the SPLC, the SPLC Action Fund, is urging the bill’s passage.

One of the bill’s namesakes, Jabara, was killed Aug. 12, 2016, in a crime reportedly motivated by racial animus. Heyer was killed one year later on Aug. 12, 2017, when a car mowed down counter-demonstrators protesting neo-Nazis at a rally in Charlottesville, Virginia. The text of the bill isn’t publicly available.

“The Southern Poverty Law Center (SPLC) reported a sharp uptick in reported hate crimes in the fourth quarter of 2016,” according to a press release from Kaine, who was Democrat Hillary Clinton’s running mate on the presidential ticket in 2016.

“Researchers have shown that reported hate crimes following President Trump’s election made up the second largest surge since the FBI began collecting data in 1992. Yet the FBI’s annual Hate Crimes Statistics report vastly understates the true incidence of this problem. In 2017, the report reflected that approximately 7,000 hate crimes occurred nationwide, when the SPLC believes the number is closer to approximately 250,000 per year.”

The problem is that research isn’t what the SPLC does, according to critics. They say the group pumps out politically skewed reports that target conservatives and moderates who refuse to toe the SPLC line.

In June 2018, the SPLC paid more than $3 million as part of a legal settlement to former Muslim extremist Maajid Nawaz for wrongfully placing him and his counter-extremism think tank, Quilliam, on an anti-Muslim hate list.

“Sometimes, the press will describe us as monitoring hate groups,” former SPLC spokesman Mark Potok told a conference in Michigan in 2007. “I want to say plainly that our aim in life is to destroy these groups, completely destroy them,” using a “strictly ideological process.”

Critics say the Montgomery, Alabama-based Southern Poverty Law Center, whose founder, Morris Dees, and president, Richard Cohen, were recently ousted allegedly for employee abuse, treats all opposition to illegal or legal immigration, open borders, and multiculturalism as hate, and all political expression of those views as hate speech.

The SPLC also has a record of promoting hate crime hoaxes, critics say, as well as ignoring bias incidents against white people and Jews targeted on university campuses by Islamist and anti-Israel groups.

Floyd Lee Corkins II admitted that he relied upon SPLC reports in 2012 when he attempted a mass shooting at the offices of the Family Research Council, wounding a guard. Because the group opposes same-sex marriage, it was designated a “hate group” by the center, a characterization rejected by left-wing columnist Dana Milbank. In a Washington Post column that year, he referred to the FRC as “a mainstream conservative think tank.”

“I disagree with the Family Research Council’s views on gays and lesbians,” he wrote. “But it’s absurd to put the group … in the same category as Aryan Nations, Knights of the Ku Klux Klan, Stormfront, and the Westboro Baptist Church.”