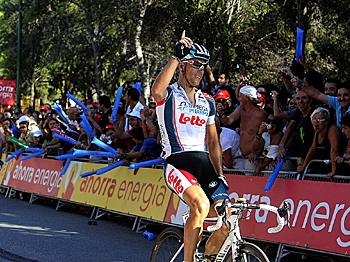 Philippe Gilbert of the Omega-Pharma-Lotto team celebrates his Stage Three win in the Vuelta a Espana. (Jose Jordan/AFP/Getty Images)
News

Gilbert was dropped from the peloton on the second big climb of the day, but made his way back to the front in time to outpower his rivals for the win.

"I was dropped in the last three kilometres of the Puerto de León," Gilbert told CyclingNews.com. "I lost maybe 30 seconds but I didn't panic because I had studied the course really well and I knew what I was doing. On the downhill I took a lot of risks to come back.”

"I received a great help from my teammates, so I managed to start the final climb in the first five positions. I accelerated 600 meters from the finish line. I knew all the curves and the details of the route because I had done it in a car this morning.”

This marks Gilbert’s first time in the first leader’s jersey in any race.

Stage Three started with a Category Two climb up the Puerto de Ojen. Seven riders used the climb to launch an attack, which collapsed on the slopes of the Cat 1, Puerto del Leon, the second big climb of the stage.

Of the attackers, only Xacebo Galicia rider Serafin Martinez was able to keep away; he came within a kilometer of winning the stage, but was ridden down.