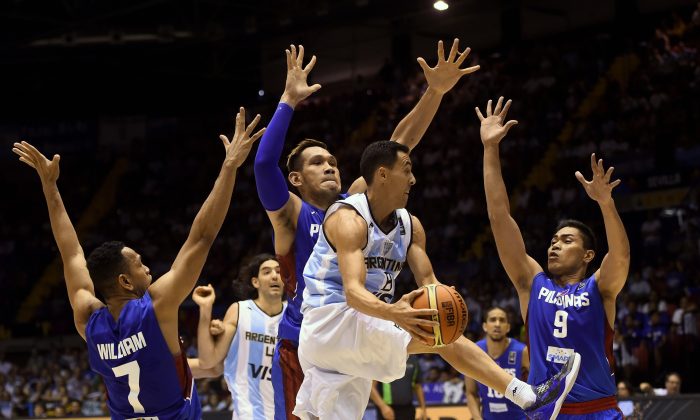 The key moment came with less than a minute left–Gilas had the ball and was down just 2 points, and head coach Vincent Reyes had called timeout. But the drawn up play seemed to break down. Jayson William went up for a 3-pointer which appeared to be partially blocked. He came back down with the ball and was called for a travel.

Gilas was forced to foul and the game was over after Argentina made two free throws.

Coach Chot Reyes said that the loss was painful.

“It’s painful because the players worked so hard. I thought that we’re happy that we’re fighting, that we’re competing against top 3 team in the world,” said Reyes after the match, reported ABS-CBN.

But the team is showing great effort.

Jimmy Alapag said that the great effort shows that Gilas belongs in the World Cup.

“It’s a once in a lifetime to play against the No. 3 in the world and it’s a game I thought we fought every step of the way …in the game of basketball that’s all you can ask for,” said Alapag.

“Before this tournament started, we want to give ourselve the chance to stick around which we still do. But I think most of if it is we want to get respect from the world. We deserve to be here.”

The Philippines will now rest on Tuesday, then play Puerto Rico on Wednesday and Senegal on Thursday. Friday is designated a rest day before knockout play starts next Saturday, September 6.

Gilas will have to win its final two games to have any chance of getting into knockout play.

See the score updates and video highlights below.

Ranidel de Ocampo leads the Philippines with 18 points while Andray Blatche had 14 points and 15 rebounds. Jim Alapag chipped in 15 points. Tellingly, no Gilas player had more than 2 assists.

Luis Scola led Argentina with 19 points and also had 7 rebounds and 4 assists. Marcos Mata chipped in 17 points and 9 rebounds.

–Another 3-pointer from Alapag cuts the lead to five a couple of minutes into the quarter.

–Scola picks up his fourth foul–if he gets one more he fouls out. Alapag misses a 3-pointer. Norwood misses another 3-pointer.

–Gilas turns the ball over–Williams traveled–and are forced to foul.

–Things are getting intense between the teams, with Blatche and Nocioni going at it.

–Blatche gets a steal then makes a bucket, then Tenorio gets fouled on a 3-point attempt. All three free throws are made.

–Gabe Norwood gets another sweet dunk over a defender to tie the game 48-48.

–Argentina goes on a run to go up 59-51, forcing Gilas coach Vincent Reyes to call timeout.

–Alapag drills two 3-pointers to cut the lead to 9, but Mata answers with a 3 for Argentina.