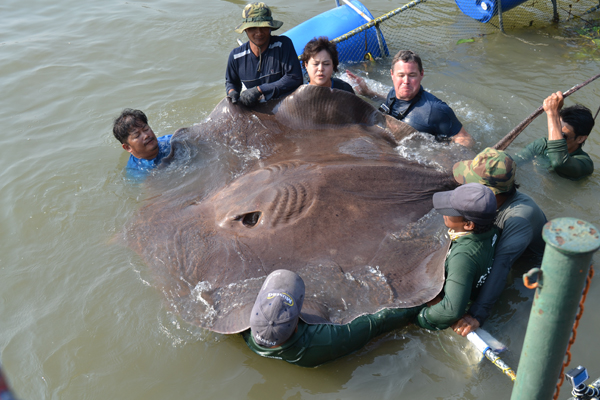 Conservationists and scientists have managed to catch-and-release what could be the world’s biggest freshwater fish ever for an upcoming episode of Ocean Mysteries. Naturalist and host of the show, Jeff Corwin—along with wildlife veterinarian, Nantarika Chansue, and the tourist fishing group, Fish Siam—managed to reel in a giant freshwater stingray (Himantura polylepis) that measured 2.4 meters (7.9 feet) across and 4.3 meters (14 feet) long in Thailand’s Mae Klong River.

“I was at the rod for a number of times while fishing for rays, I’ll never forget the strain on by back, legs and arms, all of us experienced this and we were soaked with sweat. When I was wiped then someone would take my place, basically it took five guys to wrangle up one sting ray!” Jeff Corwin told mongabay.com.

The massive female fish had already been caught and tagged in 2009 by Chansue. The fish was pregnant then and after another ultrasound, Chansue found it was pregnant again with two fetuses. Chansue is researching the life cycle of this little-known mega-species. Usually, giant freshwater stingrays give birth to one to four live pups, which are then nursed on secretions from the uterus known as histotroph.

The team was unable to acquire an exact weight, but estimated that the massive stingray weighed between 318 and 363 kilograms (700 to 800 pounds).

The giant freshwater stingray is listed as Endangered by the IUCN Red List and threatened by fishing, pollution, and dam-building. Pressure is also rising due to sports fishing and catching for aquariums.

“Our goal is to make this one hell of an episode for Ocean Mysteries, probably one of best for the series!” said Corwin. “But my personal mission is to show science and conservation in action, and highlighting a talented group of locals fighting to save their national natural heritage. “