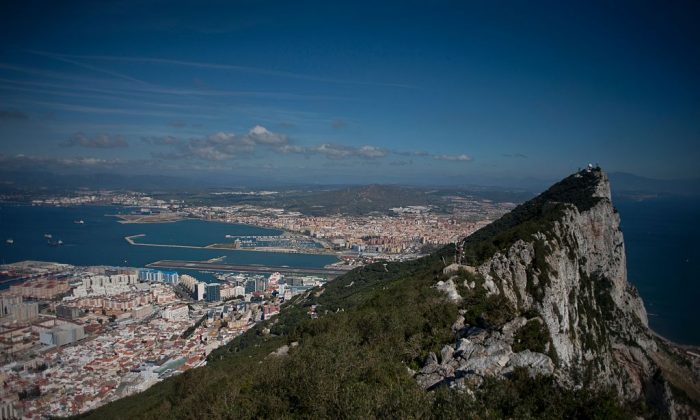 A picture taken on March 17, 2016 shows the Rock of Gibraltar with Spain in background. (JORGE GUERRERO/AFP/Getty Images)
Europe

MADRID— Gibraltar could find its access to the single European market blocked by a hostile Spanish government if the United Kingdom were to vote to leave the European Union in a referendum next month, the chief minister of the tiny British territory on Spain’s southwestern tip said Sunday.

Fabian Picardo told The Associated Press that Spanish Foreign Minister Jose Manuel Garcia-Margallo had warned that if Britain exits the EU, the Popular Party government currently in power would “require that we accept joint sovereignty with Spain to have access to the market.”

Picardo said British Foreign Minister Philip Hammond had acknowledged that the European mechanisms in place to keep the frontier between Spain and Gibraltar flowing “will not be available to us if we are not members of the EU.”

Gibraltarians were overwhelmingly “on the ‘remain’ side” in the EU debate, he said.

“But, it’s important to send a message to those in the U.K. who think that there would be no adverse consequences for Gibraltar in the event that the U.K. were to leave the EU, that Garcia-Margallo made his point very clearly,” Picardo said.

Gibraltar would find its trade adversely affected if Spain took such action, but nevertheless, “we will never pay any sovereignty price either for access to the single market or for any other reason,” Picardo said.

Spain’s main opposition Socialist Party wasn’t against keeping Gibraltar’s borders open because it acknowledged it is “an important actor on the economic front,” creating 10,000 jobs in the southwest region, Picardo said.

Spain’s June 26 general election was hence almost as important to Gibraltar as the U.K.’s referendum on June 23 because a political divide exists over a free-flowing border, Picardo said.

Spain ceded Gibraltar’s sovereignty to Britain by treaty in 1713 but has persistently sought its return ever since.