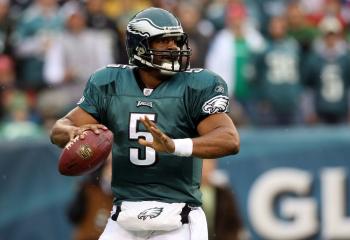 Drew Carlucci
View profile
Follow
biggersmaller
Print
For a second week in a row, the New York Giants (7–5) will face another NFC East archrival at the Meadowlands as they take on the Philadelphia Eagles (8–4) Sunday night.

Speaking with www.giants.com, Giants quarterback Eli Manning knows this matchup is a huge one. He said, “Last week was a big game, but we’ve got four big ones left, no bigger than this one versus Philly.”

With both teams coming off of impressive wins last week, a win for the Giants would give them a chance to contend for the leading spot in the division alongside the Eagles and Dallas Cowboys. A win for the Eagles would certainly put them in very good shape to make the playoffs and it may put the nail in the Giants’ coffin.

The Giants victory last week over Dallas breathed new life into the team and proved to each player that if they come together as a cohesive unit they can win against any team in the league.

Against the Eagles, the Giants defense will have to continue playing as they did last week and really concentrate on putting plenty of pressure on Philly quarterback Donovan McNabb. It is important that New York contains him in the pocket and prevents him from rolling out, where he likes to find open receivers downfield.

Should McNabb be able to do so, he has some weapons on this team that New York must account for—wide receivers Jeremy Maclin, DeSean Jackson, and tight end Brent Celek.

A 2009 first-round selection out of Missouri, Maclin is becoming a very good receiver for “the Birds” and is second on the team in receiving with 623 yards and four touchdowns.

Jackson, the leading receiver for Philadelphia, has 769 yards receiving and is averaging 69.9 yards per game.

He is recovering from a concussion but figures to play against the Giants and has been turning heads this season hauling in six touchdowns of 50 yards or more. If he gets three more such touchdowns, Jackson will set a new NFL record.

Giants defensive coordinator Bill Sheridan commented on the talented receiver and knows his players must prevent him from breaking open a big play. He said, “DeSean Jackson is probably as explosive a player as there is in the NFC. They [Eagles] have had their most success on big plays so that will be a huge emphasis for us.”

As for Celek, the 6-foot-4-inch 255-pound tight end is a very reliable pass catcher and a favorite red zone target of McNabb. Like Jackson, he also has six touchdown receptions.