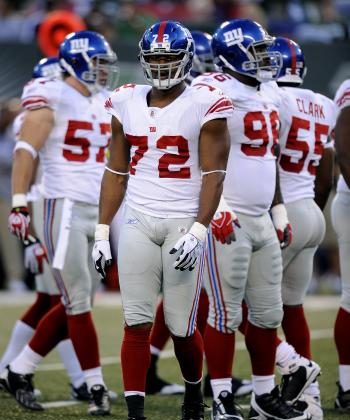 By Karl Yu
Print
How does the old saying go about where to go when you’re on top?

The New York Giants went on one of the greatest road runs last season. After losing their season opener in Dallas 45–35, they won every one of their remaining away games including the Super Bowl against the undefeated New England Patriots, where they were the road team designate.

But the Giants can’t live off memories of 2007 forever, and a new season is upon us. So what will they do for an encore?

The G-Men will immediately be shorthanded in an area that was a great strength to them last year.

As a defense last year the New York Giants finished seventh in the league allowing 305 total yards from scrimmage. They bolstered that with a fierce pass rush that racked up a league-best 53 sacks.

The good news is that Spagnuolo resisted an offer to become the Washington Redskins’ new head coach.

The bad news is a number of important cogs in the defensive line won’t see action in 2008.

Although he’s flirted with retirement before, defensive leader Michael Strahan actually hung up his cleats in June. That wasn’t such a glaring loss until Osi Umenyiora went down during an exhibition game against the Jets on Aug. 23.

Umenyiora, who led the team in sacks during the regular season last year with 13, tore cartilage in his left knee, had surgery, and will spend the entire season on the Injured Reserve (IR) list.

The team also lost linebacker Kawika Mitchell, who chipped in with four sacks last season, to the Buffalo Bills.

The cupboards aren’t totally bare for the Giants’ defense, though, as middle line backer Antonio Pierce and defensive end Justin Tuck, who was second on the team with 10 sacks, return.

On the other side of the ball, Plaxico Burress missed training camp because of a right ankle injury but according to reports, he was hitting the field “full speed” in practice last week.

The team dealt talented but loud-mouthed tight end Jeremy Shockey to the New Orleans Saints and that might be good for Giants QB Eli Manning.

ESPN speculates that Shockey’s brash attitude might have had a negative effect on Manning and that was accentuated by the fact that the signal caller played well after Shockey broke his leg after a game vs. Washington in mid-December.

The offensive line remains largely intact, which is more good news for Manning.

In the Cross Hairs

Being defending champs, the Giants will be within the cross hairs of every team they play. But their schedule isn’t very difficult.

Of New York’s NFC East rivals, the Washington Redskins and Philadelphia Eagles aren’t being projected to contend for the division lead, leaving only the Dallas Cowboys as a roadblock.

However, the Giants have more than matched the Cowboys pound-for-pound, going 10–8 against “Big D” since 2000.

The Giants have what it takes to contend for the division title and with a little luck, home field advantage, and a first-round bye, their future looks bright.

But do they have what it takes to repeat a Superbowl win? Probably not. It will be hard to repeat last year’s road record and the Umenyiora injury is a big loss.

Then again, if you asked if the Giants would win last year, the answer would probably be the same.