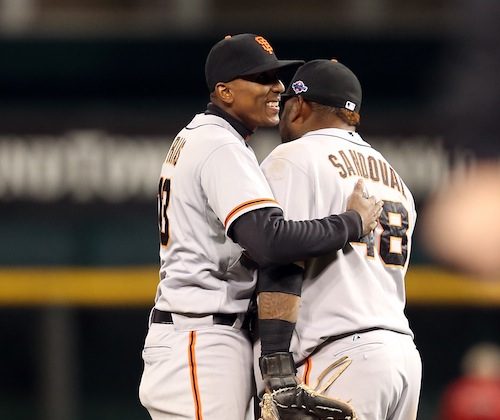 The San Francisco Giants scored three runs in the seventh inning—two of them off a home run by Pablo Sandoval—to break the game open and win 8–3 in Cincinnati in Game 4 Wednesday. The win ties the best-of-five series at two games apiece. All four wins in this series have been on the road.

The home run for Sandoval was one of three hits on the day for the Giants third baseman, who also drove in three runs.

Former two-time Cy Young winner Tim Lincecum came on in relief for the win. Lincecum, who struggled mightily this season, struck out six over four and a third innings while allowing just two hits and a run.

In the other National League contest, St. Louis shut out Washington 8–0, behind Chris Carpenter and three relievers. The foursome held the Nationals to seven hits—six of them singles to take a 2-1 series lead.