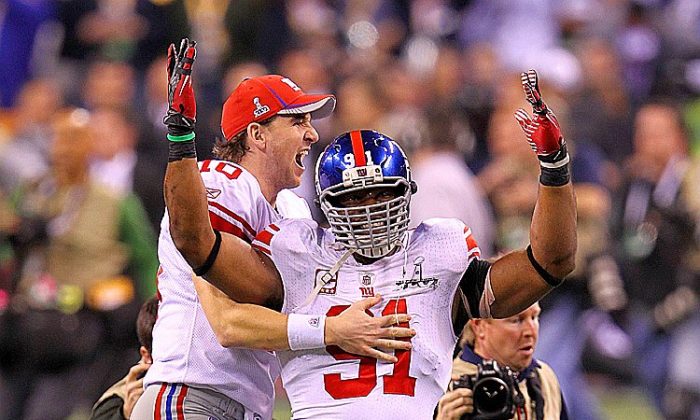 Mario Manningham 82 of the New York Giants makes a catch on the sidelines against Sterling Moore 29 of the New England Patriots for a gain of 38 yards in the fourth quarter during Super Bowl XLVI. (Rob Carr/Getty Images)
NFL

For New England fans, this one was all too similar.

Four years ago in Super Bowl XLII Manning took some of these same Giants down the down the field, trailing 14–10, for the game-winning score against arguably the best regular season team in history, the 16-0 Patriots. The drive was of course highlighted by wide receiver David Tyree’s miraculous 32-yard one-handed reception.

This time the Giants found themselves starting their final drive at their own 12-yard with 3:46 remaining, while trailing 17–15—the perfect spot for Manning.

Manning, whose record-setting 15 fourth-quarter touchdown passes this season qualifies him as one of the best pressure-players in NFL history, found wide receiver Mario Manningham on the first play down the sidelines and just in between two defenders for a daring 38-yard gain.

Two plays later, Manning found Manningham again for a 16-yard completion to put them into field goal range at the 34.

Two plays later Eli hit Hakeem Nicks for a 14-yard pass over the middle to get the Giants inside the red zone (18-yard line) going into the two-minute warning.

After a quick pass sandwiched around a pair of Ahmad Bradshaw runs put the ball at the 6-yard line, Patriots coach Bill Belichick made a bold move. With his team staring at the prospect of a very makeable Giants field goal that would leave New England precious little time on the clock to score, Belichick purposely had his team let Ahmad Bradshaw score—with 57 seconds remaining—to get the ball back.

Bradshaw tried to slow down when he saw what was happening, but fell backward into the end zone anyway to give the ball back to Tom Brady’s offense for one final shot.

Brady’s Patriots, though, dropped passes on their first two plays of the drive, and were sacked on their third, before finally getting the ball to midfield for one final Hail Mary on the last play. The final heave was batted down, giving the game to the elated Giants.

Eli Manning, who ended up 30/40 passing for 296 yards and one touchdown was named Super Bowl MVP, just as he was four years ago.