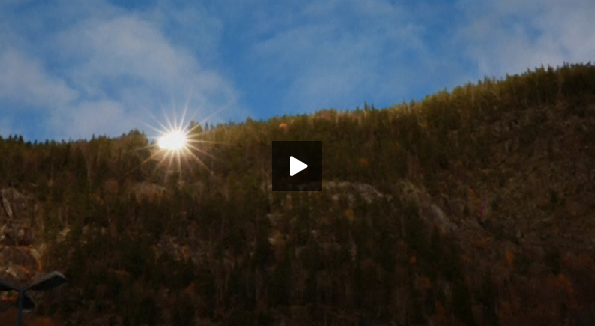 Sunshine lit up a Norwegian town in a remote, dark valley for the first time in wintertime on Oct. 30, 2013, as mirrors high on a mountainside realized a century-old dream. (NTD Television)
International

Sunshine lit up a Norwegian town in a remote, dark valley for the first time in wintertime on Wednesday, as mirrors high on a mountainside realized a century-old dream.

About one-thousand people, including children wearing sunglasses and with yellow suns painted on their faces, cheered when the sun broke through clouds to illuminate the main square in Rjukan.

It’s been until now in shadow from early October to mid-March.

The sensor-equipped mirrors, powered by solar and wind energy, will automatically adjust, following the sun, to continually shine upon the town square in the bottom of the valley.

Mayor of the area including Rjukan, Steinar Bergsland, says the idea itself is 100 years old and it has been achieved today, in a town “where the impossible can become possible.”

The man behind the idea is Rjukan resident and artist, Martin Andersen.

He moved to the town from Paris in 2001 and says he missed the sun, which receded higher and higher on the mountain side during winter.

There are 3,500 inhabitants in the industrial town which is about 110 miles west of Oslo.

The reflected sunlight, covering 6,500 square-feet, is meant to create a meeting place for sun-starved locals and a draw for tourists. Organizers say the reflected light will be over 80 percent as bright as the real sun.

The sun shines here in the summertime, when it’s higher in the sky, but sets on October 4 behind the mountain and does not return until March 12.

Similar mirrors were first set up in 2006 in the Italian village of Viganella in the Alps, which is also hemmed in a dark valley.

Rjukan nestles in a deep valley in the shadow of Gaustatoppen, a 6,200 foot-high mountain that hosts a ski resort.

The idea was first proposed in a letter to a local newspaper by a bookkeeper, Oscar Kittilsen, on Oct. 31, 1913.