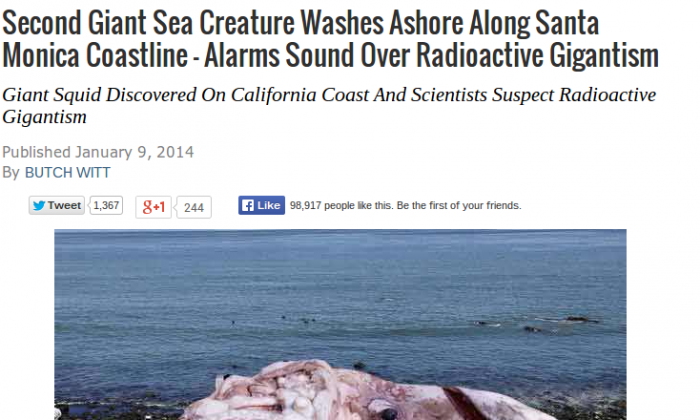 A an article showing of a giant squid with “radioactive gigantism” washed up on the coast of Santa Monica is a fake, but thousands of people shared and “liked” it on Facebook.

The main photo–which shows the squid on the shore while people are gathered around–is Photoshopped.

The squid, which measures 30 feet long, was actually discovered on the shore at La Arena beach in Cantabria, Spain in October 2013. A photo of that squid was taken and was Photoshopped into the Lightly Braised Turnip satire.

The Lightly Braised Turnip appears to be a satire news site in the vein of The Onion, but it has no disclaimer identifying it as such.

It’s also worth pointing out that no national or local media outlets have reported on the giant squid.

But on Twitter, a large number of people tweeted the fake story and commented on it.

“Is this real? Radioactive gigantism?” one wrote.

“Fukushima Freaks Of Nature!!!!” another wrote

Some conspiracy-oriented websites also re-posted the article or reported on it as if it were real.

The largest species of giant squid can get to be around 43 feet in length.