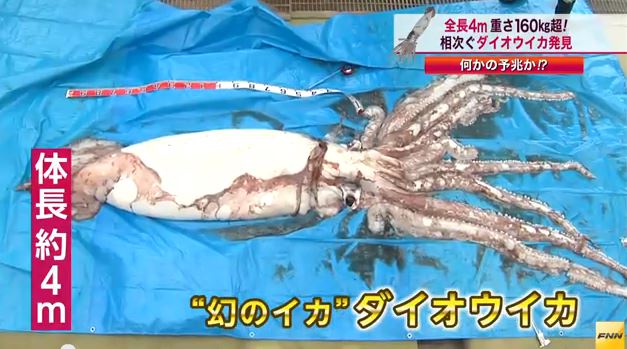 A giant squid recently caught by a Japanese fisherman made headlines this week, but the fisherman said he’s sorry that he and his crew roughed up the large mollusk while trying to reel it in.

“I wish we’d been able to make it more presentable,” Shigenori Goto told Reuters. “If I’d known it was going to be such a big deal, I’d have treated it with more respect.”

Goto said his crew caught the animal but didn’t realize it was a squid that was still alive. He said he thought it was a yellowtail.

“We were about 30 minutes into our day when this large, reddish-brown thing came swimming up from the depths,” Goto, 44, told the news agency. “I was surprised – there’s no other word for it. We all started shouting ‘giant squid, giant squid’ all at once.”

The squid weighed around 360 pounds and was about 26 feet in length.

“When I hauled up the net, the squid slowly came floating up,” Goto said, according to the Yomiuri Shimbun. “This is the first time I’ve seen such a large squid.”

Last year, Japanese scientists found for the first time a living giant squid in the northern Pacific Ocean at a depth of about 2,000 feet.

The largest giant squid ever found was nearly 60 feet in length, and it weighed almost a 2,000 pounds, according to National Geographic.

Last week, a satire news report went viral saying there was a 160 foot long giant squid that was morphed into that size due to radiation from the Fukushma power plant, and it washed up on a Santa Monica beach. It’s a hoax and the main image was Photoshopped.