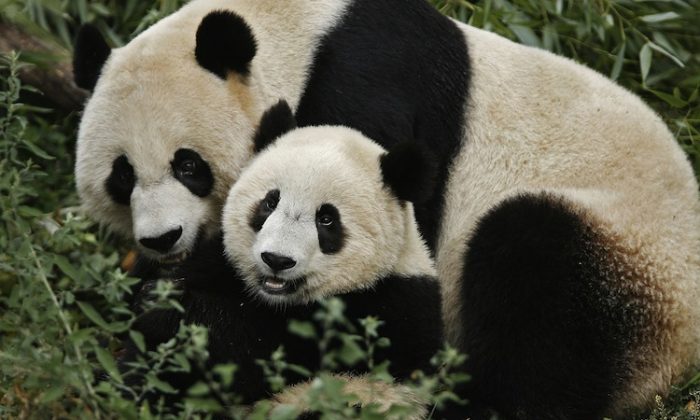 A female panda and her cub at Washington National Zoo in 2006. (Chip Somodevilla/Getty Images)
Science

Giant pandas have been found to produce a powerful antibiotic in their blood that rapidly kills pathogens. The discovery has potential applications for the treatment of superbugs and other diseases in humans.

The compound is an antimicrobial protein called cathelicidin-AM, and is thought to protect the bears from infections in the wild.

The Chinese research team re-created the chemical in the lab by studying the panda’s DNA to find the genes that produce the small protein molecule or peptide. It appears to be active against a variety of micro-organisms, including drug-resistant pathogens, and killed bacteria in less than an hour, compared with conventional antibiotics that take over six hours.

“Under the pressure of increasing micro-organisms with drug resistance against conventional antibiotics, there is urgent need to develop new type of antimicrobial agents,” study co-author Xiuwen Yan at China’s Nanjing Agricultural University told The Telegraph.

“Gene-encoded antimicrobial peptides play an important role in innate immunity against noxious microorganisms,” he continued. “They cause much less drug resistance of microbes than conventional antibiotics.”

There are thought to be only about 1,600 pandas left in the wild. Captive breeding programs have had limited success, despite huge expenditure.

This new finding could lead to stronger conservation efforts for the giant panda as there may be other useful substances still to be discovered in the bear’s genome.

As well as its commercial potential in treating superbugs, cathelicidin-AM could also be used to sterilize surfaces and utensils.