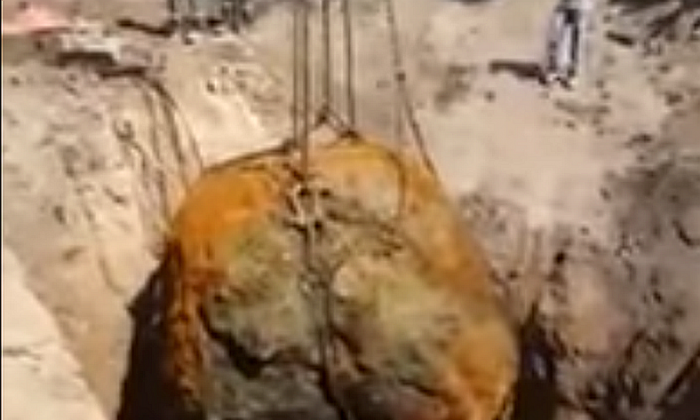 A large, ancient meteorite was dug up in Argentina in what could be the second largest space rock ever found on Earth.

The meteorite—named Gancedo, after the village it was found near, around 670 miles north of Buenos Aires—is believed to have smashed into the planet about 4,000 years ago, and is said to weigh around 68,000 pounds (around 34 tons).

A nearby town provided machinery to an excavation team to extract the rock, The Telegraph reported. News Organization Compacto Nea uploaded a video of the process on YouTube.

Extraction of the orange-hued rock was tricky: it required chains, cables, and cranes.

“We will weigh it again,” Mario Vesconi, president of the Astronomy Association of Chaco, was quoted as saying. “Apart from wanting the added confidence of a double-check of the initial readings we took, the fact that its weight is such a surprise to us makes us want to recalibrate.”

The meteorite was excavated in the so-called Campo del Cielo (meaning “Field of Heaven”), which has been hard-hit by meteorites. At least 26 craters cover the region of 1.8 by 11.9 miles, according to ScienceAlert, and around 100 tons of space debris has been extracted from the field.

“We could compare the weight with the other large meteorite found in the province. Although we expected it to be heavier, we did not expect it to exceed 30 tons,” Vesconi said, according to ScienceAlert.

The largest meteorite ever discovered is located in Namibia.