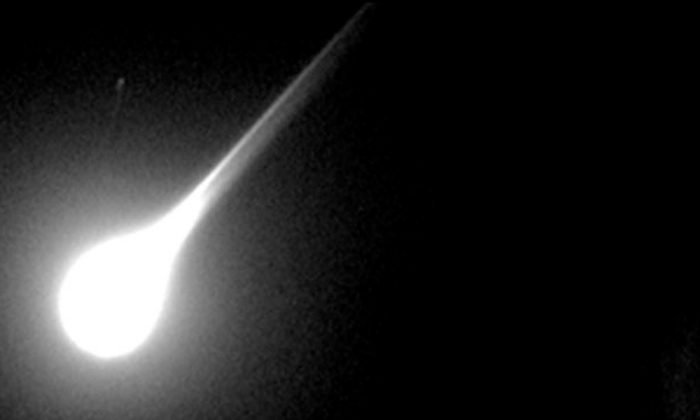 A blazing ball of light streaked across the sky over Phoenix Tuesday night, prompting residents to wonder if they’d seen a meteor.

The fireball, seen over Phoenix, Arizona, around 7:30 p.m. local time on Nov. 14, was so bright it lit up the night sky—and seemed to burn out mid-air in a flash.

The City of Phoenix caught the flare of the fireball exploding on one of its skycams.

Phoenix resident Laura Curry also caught it on video, which she posted to Twitter.

Did anyone else see this tonight in Phoenix, AZ? #meteor ? pic.twitter.com/SeJlZaP9tW

Most residents had seen meteors before—fleeting lines of light shooting high across the night sky.

The Nov. 14 fireball was so much the classic comic-book “meteor” that people couldn’t believe that that was what it was.

Did anyone just see that the meteor or asteroid just now? I'm in Arizona and it turned night sky's into daylight#asteroid #Meteorite

Others were convinced it wasn’t a meteor.

Clive Christopher referred back to a post he had made on the 12 News Facebook page on Aug. 31, where he said, ‘If my calculations are correct, there should be a Major sighting of an Unidentified Flying Object in September or October of this year in the American Southwest.

Early Wednesday morning he posted, “I called it back on August 31st! I don’t care if it’s November, off by one month in the exact location I said it would be seen!”

Waylon Todd Curley posted something similar: “It landed on Black Mesa in Northern Arizona. Sources say it’s a crashed vehicle of some sort. Not from earth anyway.”

Most of the other posters on the 12 News page thought the spectacle was celestial, rather than alien, but still very spectacular.

Michaele Lee knew it was a meteor and was glad she saw it. “I saw it in kingman. It could be nothing else. It was so big and beautiful. I feel so blessed to have seen it.”

Jonathan Triggs posted, “I was on Highway 89 coming down the hill from Yarnell just before Congress. I noticed the mountain across the valley glowing green. I looked out my driver window to see the fireball to the southeast. I had to pull over and gather myself. It was truly spectacular!”

For comparison, here is a photo of a meteor which zoomed over New York state on the night of Saturday, Nov. 11.

The American Meteor Society reported getting more than 200 calls about it.

It’s possible both of these fireballs were outliers to the upcoming Leonid Meteor Shower, which accompany the comet Tempel–Tuttle. Tempel-Tuttle passes by earth every 33 years, leaving clouds of debris each time.

The Earth passes through the debris clouds in November each year, producing some spectacular celestial light shows.

Time Magazine reported that the peak viewing days start at midnight on Nov. 17 this year, extending until dawn on the next day. Viewers can expect about 15–20 meteors per hour.

Clear skies are predicted for the southern portion of the United States. from coast to coast. Clouds might obscure the view from New England to Michigan and the northern Great Plains.