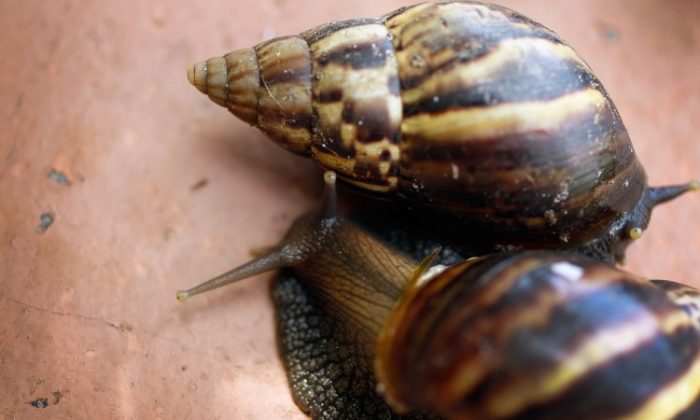 Giant African land snails are seen as the Florida Department of Agriculture and Consumer Services announces it has positively identified a population of the invasive species in Miami-Dade county on Sep. 15, 2011 in Miami, Florida. (Joe Raedle/Getty Images)
US

Giant deadly snail found: A giant African land snail was spotted in Houston recently, prompting authorities to stay away from them.

Researchers have warned that the snail can carry meningitis, according to NBC News. They said that anyone who comes into contact with them should wash their hands well.

“They also carry a parasitic disease that can cause a lot of harm to humans and sometimes even death,” Autumn Smith-Herron, who heads the Institute for the Study of Invasive Species, told NBC.

The African giant snail was found by a woman in Blair Forest, Houston, and she took a picture of it in her garden.

It was the first reported sighting of a giant African snail in Texas.

Giant African snails are considered voracious pests and can lay as many as 1,200 eggs in a year, and a specimen can live as long as nine years. The mollusk can destroy crops, trees, and plants.

In March, a giant African snail the size of a baseball was “destroyed” after it was spotted in Australia.

“Giant African snails are one of the world’s largest and most damaging land snails,” stated Australian Department of Agriculture, Fisheries and Forestry acting regional manager Paul Nixon, according to the Australia Broadcasting Corporation at the time.