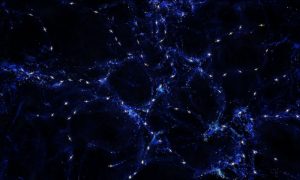 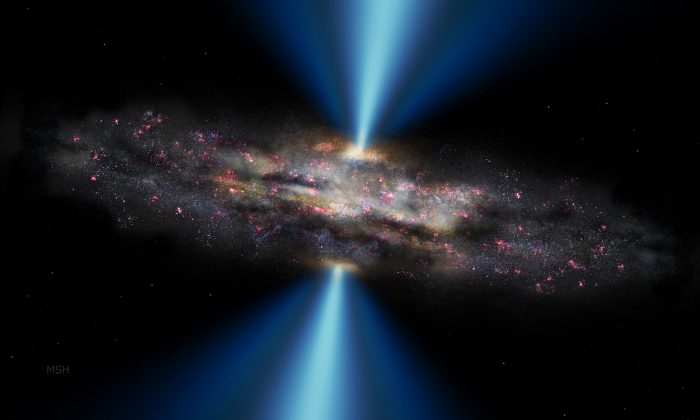 A black hole emits part of the accreted matter in the form of energetic radiation (blue), without slowing down star formation within the host galaxy (purple regions). (Michael S. Helfenbein/YaleUniversity/OPAC)
Science

Most black holes have little mass compared to their host galaxy, but a recently discovered black hole grew so quickly the host galaxy couldn’t keep pace.

The discovery has astronomers questioning assumptions about how galaxies develop.

Benny Trakhtenbrot, a researcher at ETH Zurich’s Institute for Astronomy, together with an international team of astrophysicists, was hunting for ancient massive black holes using the 10 meter Keck telescope in Hawaii. Although this kind of observations are routine for them, Trakhtenbrot and the team were surprised by the first black hole they observed.

The measurements correspond to the mass of a typical galaxy.
— Benny Trakhtenbrot

The data, collected with a new instrument, revealed a giant black hole in an otherwise normal, distant galaxy, called CID-947. Because its light had to travel a very long distance, the scientists were observing it at a period when the universe was less than two billion years old, just 14 percent of its current age (almost 14 billion years have passed since the Big Bang).

An analysis of the data collected in Hawaii revealed that the black hole in CID-947, with nearly 7 billion solar masses, is among the most massive black holes discovered up to now. What surprised researchers in particular was not the black hole’s record mass, but rather the galaxy’s mass.

“The measurements correspond to the mass of a typical galaxy,” says Trakhtenbrot, a postdoctoral fellow working within the Extragalactic Astrophysics research group of Professor Macella Carollo. “We therefore have a gigantic black hole within a normal size galaxy.”

The result was so surprising, that two of the astronomers had to verify the galaxy mass independently. Both came to the same conclusion. The team reports its findings in the current issue of the journal Science.

Was The Early Universe That Different?

Most galaxies, including our Milky Way, have a black hole at their center that holds millions to billions of solar masses.

“Black holes are objects that possess such a strong gravitational force that nothing—not even light—can escape. Einstein’s theory of relativity describes how they bend space-time itself,” explains ETH professor Kevin Schawinski, coauthor of the new study.

The existence of black holes can be proven because matter is greatly accelerated by the gravitational force and thus emits particularly high-energy radiation.

Until now, observations have indicated that the greater the number of stars present in the host galaxy, the bigger the black hole.

“This is true for the local universe, which merely reflects the situation in the universe’s recent past,” says Trakhtenbrot.

This link, along with other evidence, led the scientists to assume that the growth of black holes and the formation of stars go hand-in-hand. This is quite reasonable, if a common reservoir of cold gas was responsible for the formation of the stars and the “feeding'” of the black hole at the galaxy’s center, says Trakhtenbrot.

Previous studies suggested the radiation emitted during the growth of the black hole controlled, or even stopped, the creation of stars, as the released energy heated up the gas. The latest results, however, suggest these processes work differently, at least in the early universe.

The distant young black hole observed by Trakhtenbrot and his colleagues had roughly 10 times less mass than its galaxy. In today’s local universe, black holes typically reach a mass of 0.2 to 0.5 percent of their host galaxy’s mass.

“That means this black hole grew much more efficiently than its galaxy—contradicting the models that predicted a hand-in-hand development,” Trakhtenbrot explains.

Although the black hole had reached the end of its growth, stars were still forming, the researchers conclude. Contrary to previous assumptions, the energy and gas flow, propelled by the black hole, did not stop the creation of stars.

The galaxy could continue to grow in the future, but the relationship between the mass of the black hole and that of the stars would remain unusually large. The researchers believe CID-947 could be a precursor of the most extreme, massive systems that we observe in today’s local universe, such as the galaxy NGC 1277 in the constellation of Perseus, some 220 million light years away from our Milky Way.