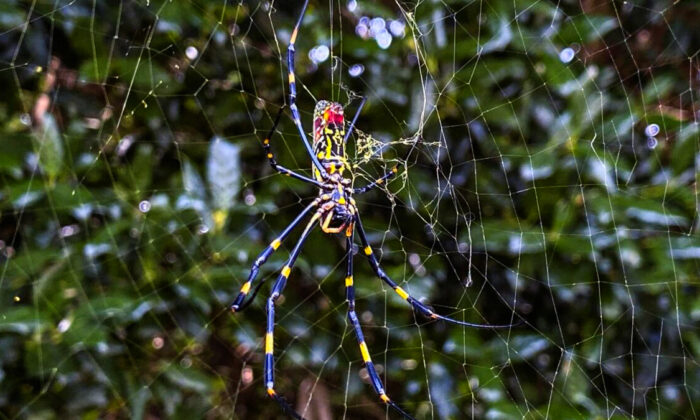 The Joro spider, an invasive arachnid species that is native to eastern Asia and first spread across Georgia in 2013, is expected to “colonize” through most of the East Coast, according to a new study.

The good news is that the bright yellow spider, which is about the size of a child’s hand and has blue-black markings, is mostly harmless to people and pets due to their fangs often being too short to puncture human skin, researchers at the University of Georgia (UGA) said. They also normally don’t bite unless threatened.

“People should try to learn to live with them,” Andy Davis, a research scientist and one of the authors behind a recent study about the invasive species told UGA Today, a publication by the university. “If they’re literally in your way, I can see taking a web down and moving them to the side, but they’re just going to be back next year.”

Benjamin Frick, a co-author of the study who works as a researcher in the School of Ecology, recommended people not to be violent toward the spider as it isn’t necessarily bad that they are spreading along the East Coast.

“There’s no point in excess cruelty where it’s not needed,” Frick said. “You have people with saltwater guns shooting them out of the trees and things like that, and that’s really just unnecessary.”

Davis pointed out that the spiders, which predominantly hail from Japan, appear to not have much of an effect on local food webs or ecosystems and they also may serve as an additional food source for native predators like birds.

According to the study, Joro spiders—or Trichonephila clavata—colonize much of Japan, which has a similar climate to East Coast regions and is a contributing factor to the spider being able to survive and spread.

Researchers explained that, unlike its closely-related species, the “golden silk spider,” which has already successfully invaded the same region over the last 160 years—the Joro spider has about double the metabolism and a 77 percent higher heart rate, making Joros capable of spreading further north and withstand brief freezes that would kill off its cousins.

“It looks like the Joros could probably survive throughout most of the Eastern Seaboard here—which is pretty sobering,” Davis said.

Joros also have a unique way of travel, called ballooning or kiting, a process in which spiders use their silks to carry them across the wind to new locations. This ability has enabled them to spread fast across the state of Georgia, but it isn’t the only reason, as humans also factor into the equation.

“The potential for these spiders to be spread through people’s movements is very high,” Frick said, noting that the chances of the spiders climbing into a car or into luggage is quite high.

“Anecdotally, right before we published this study, we got a report from a grad student at UGA who had accidentally transported one of these to Oklahoma,” he added.

It is unclear how the spiders exactly traveled from east Asia, but researchers say the first Joros likely arrived in the United States via stowaways on shipping containers. The presence of the Joro spider’s golden web was hard not to notice in Georgia, as it took over yards all over the state last year, unnerving some residents.