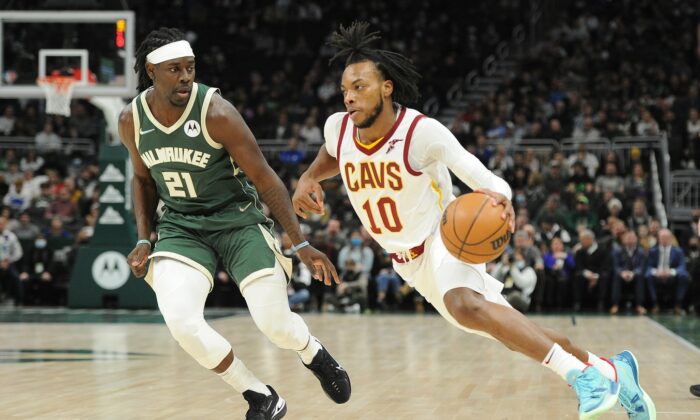 Giannis Antetokounmpo celebrated his 27th birthday by scoring 15 of his game-high 27 points in the fourth quarter as the Milwaukee Bucks held on for a 112–104 win over the visiting Cleveland Cavaliers on Monday.

Antetokounmpo returned after missing two games with a right calf injury and grabbed 12 rebounds in 27 minutes. Bobby Portis had 10 points and tied his career high with 16 rebounds.

Milwaukee recorded its eighth straight win in the series while limiting the Cavaliers to 38.9 percent shooting from the field and 15 of 46 (32.6 percent) from 3-point range. Cleveland lost its second straight following a four-game winning streak.

The Cavaliers opened the contest by missing their first seven shots but tied the game at 24 at the end of the first quarter.

Antetokounmpo was held scoreless before scoring four points in the first minute of the second quarter. The Bucks extended their lead to 11 points with 3:57 left in the half and held a 56–50 advantage at the break.

Cleveland forward Lamar Stevens hit back-to-back 3-pointers during a 12–3 run to cut the deficit to 68–64 with 5:41 left in the third quarter.

Milwaukee took a 10-point lead into the final period, but the Cavaliers responded with seven straight points to pull within 88–85.

Garland hit a 3-pointer to cut the lead to 107–100 with 2:28 remaining, before Antetokounmpo scored the Bucks’ final five points to seal the victory.