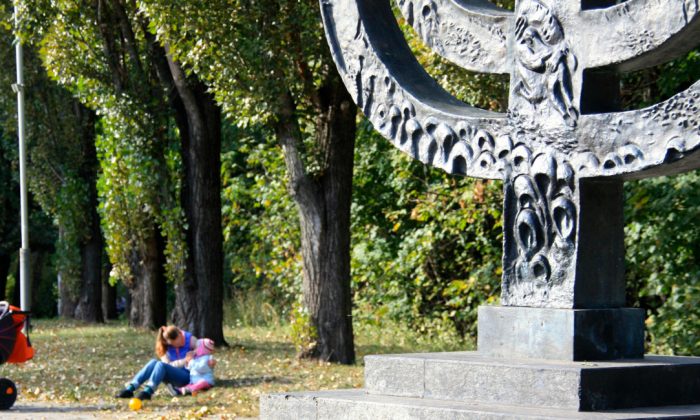 A giant menorah marks the spot where Nazis murdered about 50,000 Jews and 100,000 others at the Babi Yar ravine during World War II. Nolan Peterson/The Daily Signal)
Europe

Ghosts of Babi Yar: A Visit to the Ravine Where Nazis Murdered 150,000

KYIV, Ukraine—Seventy-four years later, I reached up and broke off a small piece of a branch that was long and gray. It was bent in the strange, contorted ways it had blindly grown to look for light here at the cold bottom of the ravine, where the forest canopy above had turned the sunny spring day into dark winter’s night.

The branch connected to an old tree with gray and brown bark that was growing out of the hardened black earth on which I stood. It had been a difficult climb down here to the bottom, where tens of thousands of bodies had fallen all those years ago.

The ravine’s muddy walls were steep and slick and carved by erosion.

Editor’s note: The Ukrainian government on Wednesday pledged $1 million to build a memorial at Babi Yar, a ravine where Nazis murdered about 150,000, including 50,000 Jews, during World War II. Officials plan to complete the memorial by the 75th anniversary of the massacre in September. The Daily Signal’s foreign correspondent Nolan Peterson recently visited the site.

In some parts the trees grew at impossible angles, their roots holding the mud slope together. At the top of the ravine, at the sharp lip of it, the wind blew through the leaves that rustled against the silence that you didn’t notice until it was broken by something as quiet as rustling leaves.

An old road ended at the edge of the ravine. That road was overgrown and closed to traffic and now just a path through a park. Young mothers pushed strollers, and young men played fetch with their dogs. Students hurriedly walked past with headphones in their ears; old men in tweed jackets and old women with covered heads shuffled along.

This old road crossed through a forest of tall trees that swayed in the spring wind until it joined a noisy, larger road full of cars and taxis and buses. This road rolled up and down hills and past stores and restaurants and coffee shops into the heart of Kyiv, where, on Sept. 26, 1941, occupying Nazi soldiers posted this order:

All Yids of the city of Kiev and its vicinity must appear on Monday, Sept. 29, by 8 o’clock in the morning at the corner of Mel’nikova and Doktorivska streets (near the cemetery). Bring documents, money, and valuables, and also warm clothing, linen, etc. Any Yids who do not follow this order and are found elsewhere will be shot. Any civilians who enter the dwellings left by Yids and appropriate the things in them will be shot.

Three days later, on Sept. 29, 1941, more than 33,000 Jews packed as much as they could carry and left their homes in Kyiv forever. They brought suitcases full of clothes, jewelry, art, and memories. Some children carried a stuffed animal in one hand and held a parent’s hand with the other as they spilled into Kyiv’s cobblestone streets for the two-mile walk from the city center to the Babi Yar ravine.

The SS troops, waiting at the corner of Mel’nikova and Doktorivska streets,were surprised; they expected only 5,000 to 6,000 Jews to show up. The troops, part of the combat arm of the Nazis’ most fanatical organization, wondered if they had enough bullets for what they had been ordered to do.

Some Jews arrived early, hoping for a better seat on the fictional resettlement trains. People in apartments on Melnyk Street, along which the more than 33,000 Jews marched, described an “endless row” that was “overflowing the entire street and the sidewalks.”

As the procession marched along the road to Babi Yar, most still believed the lie that they were to be resettled. But some within the crowd must have suspected what was about to happen. They were marching to their doom.

Maybe it happened when the SS troops started taking away their luggage, and then their coats, and then their clothes, and then their shoes and their underwear. Maybe they understood when they first heard the machine guns firing, or when they reached the end of the road and were beaten and driven in groups of 10 to the edge of the ravine and looked down at the pile of naked dead and waited for their turn as the bullets went down the line and the bodies dropped sharp and hard in the faster-than-gravity way that death pulls one to the earth.

Maybe during all of this, some finally understood what was happening to them.

But a morning walk is hardly enough time to abandon all hope in the goodness of men and believe in the evil at your back.

By the night of Sept. 30, 1941, the bodies of 33,771 murdered Jews lay at the bottom of the Babi Yar ravine. Soon the bodies of about 100,000 others—ethnic minorities, communists, prisoners of war, gypsies, Ukrainian nationalists, and more Jews—slid down the steep dirt slopes to join them.

The bodies remained there, naked in the earth, until August 1943, when the Nazis decided to conceal their crimes as the Red Army advanced on Kyiv.

Paul Blobel, the commander of Sonderkommando 4a, whose troops had slaughtered the Jews of Kyiv, ordered his men and workers from the nearby Syrets concentration camp to dig up the bodies and burn them.

With the aid of bulldozers and bone-crushing machinery, the bodies were piled with wooden logs into pyres two stories high, doused with gas, and ignited. Each pyre contained about 1,500 bodies and burned for two days and one night. It took 40 days to burn all the bodies.

With the evidence of their crime destroyed, the Nazis tried to kill the memory of it by executing the concentration camp workers. But 25 of them escaped, of whom 15 survived the war to tell their stories.

Still, Stalin’s anti-Semitic, paranoid revision of history after World War II faded the memory of what happened at Babi Yar, as well as that of the 850,000 to 900,000 Ukrainian Jews murdered during the Holocaust.

Today, the ravine where the Nazis murdered about 150,000 is easy to miss. A few metal crosses hidden within the trees mark its edge, and a lonely statue of a menorah stands in a nearby clearing.

After the war was over, the seeds returned to Babi Yar. They settled and sprouted roots in the mix of earth and human ash in the ravine. Over time, the seeds grew into trees that left more seeds. A forest was born.

At some point, one particular seed found its way to the bottom of the ravine. This seed took root and sprouted into a tree. Its trunk grew up tall, and its branches spread wide to search for and absorb the sun’s life-giving light.

One of those hopeful branches grew in such a way that its tip was only a few feet above the hard black earth on which I stood at the bottom of the ravine.

Just low enough for me to break off a small sign of life from this forgotten place of death.

No monument stands over Babi Yar.
A steep cliff only, like the rudest headstone.
I am afraid.
Today, I am as old
As the entire Jewish race itself.