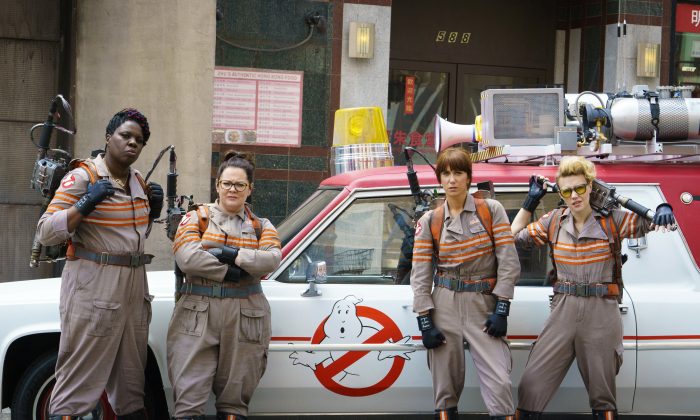 ‘Ghostbusters’ Holds Its Own, but ‘Life of Pets’ Still No. 1

NEW YORK—After months of prerelease debate, Sony Picture’s female-led “Ghostbusters” reboot arrived in theaters as neither a massive success nor the bomb some predicted, as the much-scrutinized film opened with an estimated $46 million in North American theaters, second to the holdover hit “The Secret Life of Pets.”

“The Secret Life of Pets” stayed on top with $50.6 million in its second week, according to studio estimates Sunday.

But all eyes were on Paul Feig’s “Ghostbusters,” which resurrects the 1984 original with a cast of Melissa McCarthy, Kristen Wiig, Leslie Jones and Kate McKinnon. Sony, noting it was the best opening for a live-action comedy in more than a year, called the result “a triumph.” Audiences, which broke down 46 percent male and 54 percent female, gave it a solid B-plus CinemaScore.

“There was a lot of scrutiny on the film going up to release, but the movie in the opening delivered,” said Josh Greenstein, president of marketing and distribution for Sony. “We’ve successfully restarted a very important brand and we’re just ecstatic at the results.”

Yet given its hefty price tag—the film cost $144 million to make, after rebates, plus more than $100 million to market — it’s a relatively tepid start for “Ghostbusters” that will put pressure on the film to perform well overseas. And that could be a challenge in some territories that don’t have the same familiarity with the original “Ghostbusters” films.

A release in China, the world’s second-largest film market, is also in question. China has regulations against depictions of the supernatural in movies. Greenstein said Sony will submit the film for release “and we’ll see if we get accepted or not.”

Among new releases, “Ghostbusters” had the weekend largely to itself. The true-story crime drama “The Infiltrator,” starring Bryan Cranston, supplied a counterprogramming option from the usual summer fare, and took in $5.3 million. Woody Allen’s 1930s Hollywood drama “Cafe Society” opened in limited release with $355,000 in five theaters.

For Sony, the stakes for “Ghostbusters” were extremely high. Greenlit by the since-departed Amy Pascal, the film is intended to kick off several future “Ghostbusters” installments.

Aspirations for more “Ghostbusters” sequels had long languished largely because of the continued disinterest of original star Bill Murray. But Feig, who has found critical raves and strong box office for female-starring comedies like “Bridesmaids,” ”The Heat” and “Spy,” won over the studio and the movies’ creators with his idea to reboot around McCarthy and Wiig.

But the film found plenty of detractors, including even Donald Trump . Some fans objected to the gender switch, others complained that the first trailer was subpar and some even fretted that any new incarnation of the comedy classic (one of the biggest box office hits of the 1980s) would tarnish their fragile memories .

Feig’s “Ghostbusters” had the vocal support of director Ivan Reitman (a producer on the reboot) and Murray, who makes a cameo in the film. Critics were largely mixed on the movie, which scored a 73 percent “fresh” rating on Rotten Tomatoes.

“There was all this hoopla and all this chatter about the movie and now it’s opened and it did just fine,” said Dergarabedian. “I don’t think there’s a referendum on whether or not an all-female cast in a movie has an impact. If people like the concept and the cast, they’re going to go see the movie.”

Estimated ticket sales for Friday through Sunday at international theaters (excluding the U.S. and Canada), according to comScore: