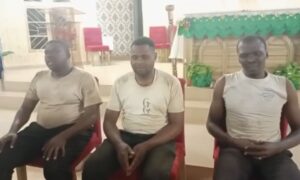 ‘Ghost Ship’ Washes Up Ashore With Not a Soul Onboard

An abandoned oil tanker from Panama has washed up on the shores of West Africa, prompting questions about what happened to the ship’s crew.

The 210-foot-long tanker, the Tamaya 1, was headed toward the Sengalese port of Dakar, and was last seen on April 21.

It took authorities weeks to respond to the tanker, which landed on the shores near Robertsport, which doesn’t have a port.

Photos of the vessel were uploaded to Facebook in recent days.

Experts suspect that the crew abandoned the ship after not being paid.

“Our best bet is that the vessel’s owner might have gone broke and had no money to pay crew members,” an employee at Liberia’s port authority told the Liberian Daily Observer. “And therefore, the crew abandoned the ship.”

There are speculations that the ship was sacked by pirates.

As it sat on the sand, the ship was looted by local residents, according to local reports.

West Africa waters are some of the most dangerous in the world. More than 1,000 mariners were attacked in the Sea of Guinea last year, according to Oceans Beyond Pirates (OBP).

As oil prices have declined, pirates off the coast of West Africa have switched to kidnapping people and holding them for ransom. Last year, 23 people were killed by pirates, including in mock executions, according to OBP.