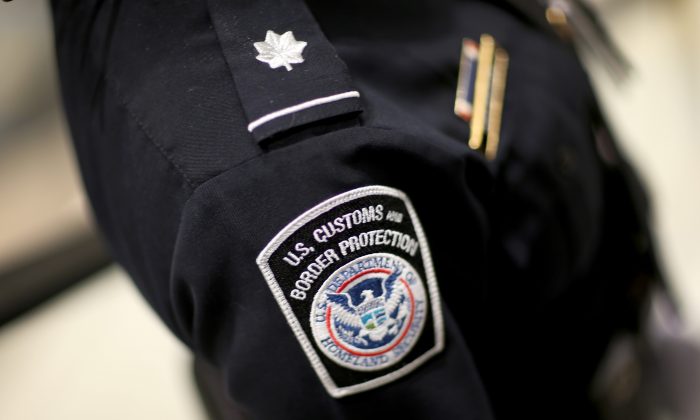 A U.S. Customs and Border Protection officer in a file photo. (Joe Raedle/Getty Images)
US News

Ghana Latest Nation Hit With US Visa Sanctions for Non-Compliance

WASHINGTON—The Department of Homeland Security has issued visa sanctions against Ghana for failing to accept their nationals that the United States is trying to deport.

The African nation is the seventh country hit with such sanctions by  the Trump administration.

In September 2017, Cambodia, Eritrea, Guinea, and Sierra Leone were sanctioned, and in July 2018, Burma and Laos were added.

The sanctions most-often involve the suspension of B visas (temporary visitors for business or pleasure) to government officials.

“American citizens have been harmed because foreign governments refuse to take back their citizens. These sanctions will ensure that the problem these countries pose will get no worse as ICE continues its work to remove dangerous criminals from the United States,” then-ICE Acting Director Thomas Homan said in September 2017.

After six months, ICE is forced to release illegal immigrants who are in detention and ready for deportation if their country of origin won’t accept them or issue travel documents for them. The six-month deadline is pursuant to a 2001 Supreme Court ruling, Zadvydas vs. Davis.

In 2015, a Haitian man, whom Haiti failed to accept back when the United States tried to deport him, was released after six months and subsequently murdered a 25-year-old Connecticut woman in her home.

ICE had attempted to deport Jean Jacques, according to a 2016 Inspector General report. He was listed as a passenger on three charter flights to Haiti in June, August, and October of 2012, but the government of Haiti refused to accept him.

The Trump administration has been “extremely active” on recalcitrant countries, said Sarah Pierce, policy analyst at the Migration Policy Institute.

“Recalcitrant countries is just one strategy in their broader scheme of trying to increase interior enforcement,” Pierce said.

But, the sanctions may work, she said. One example is Iraq, which was included on the initial travel ban that imposed tight restrictions on visas from several countries.

Iraq wasn’t included in the final iteration of the travel ban and Pierce said “one of the things that had changed was Iraq agreed to accept deported nationals.”

Before Trump, only two countries—The Gambia (2016) and Guyana (2001)—were sanctioned for not accepting back their nationals.

Pierce said the population of illegal aliens that have been released from detention due to the Zadvydas ruling should be simple for ICE to remove.

“And just the missing piece is the fact that their home countries aren’t accepting them,” she said. “So by putting all of these pressures on these foreign nations, this administration has been able to kind of open up this population to ICE to execute their removal orders and increase those numbers.”