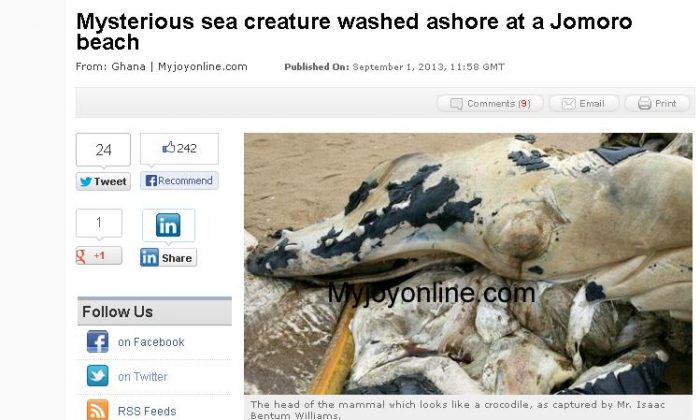 A screenshot of My Joy Online, a Ghanaian news agency, shows a purported mysterious sea creature, which is described by a local as having a head which looks like a crocodile, and a tail similar to a whale's. (Screenshot/My Joy Online)
Africa

A mysterious creature has appeared on the shores of a beach in Ghana’s Jomoro District.

The creature, deemed a mammal weighing between six and eight tons, is decomposing after washing ashore several days ago, locals told My Joy Online, a Ghanaian news agency.

The stench coming from the mammal is disturbing and makes it hard to breathe, locals said.

Isaac Bentum Williams, a businessman who was at the shore, said the creature could be an endangered species and said scientists and researchers should come and study it.

People commenting on the article online said it should definitely be studied.

“This should have been reported to the national and international authorities for intensive study,” one said. “A mammal with resemblance of crocodile head and whale tail weighing between six and eight tons require high level studies to not just buried, it`s really a strange mammal and it will be vital idea to know more about it.”

Another said that it looks like the “extremely rare Coelacanth fish,” which “lives in the most profound depths in the oceans.”

“Specimens have been caught and photographed off the South African coast at the beginning of the 20th century and also Seychelles,” the commentor said.

Fisherman planned to bury the creature on September 3, the only day they usually take off.