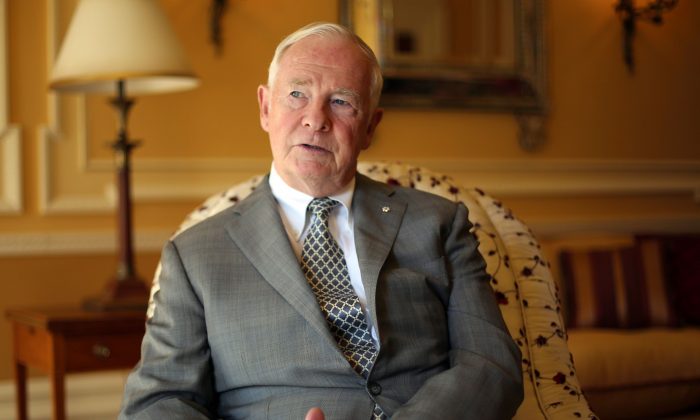 OTTAWA—The federal government signalled Dec. 2 that Canada could welcome as many as 50,000 refugees by the end of 2016 as Gov. Gen. David Johnston urged Canadians to embrace those fleeing the conflict in Syria.

Calling Canada’s response to the crisis a “defining moment” for the country, Johnston hosted a forum that brought federal, provincial, and municipal political leaders together with heads of business organizations and aid groups trying to better co-ordinate efforts to deal with the impending influx of 25,000 refugees by the end of February.

“And it’s even more than that. It’s an opportunity … to re-imagine how we take care of the most marginalized and vulnerable among us.”

Immigration Minister John McCallum told a morning panel at the forum that he’s concerned the current level of enthusiasm among Canadians for bringing in refugees will be lost if governments and aid organizations don’t properly communicate.

“There’s nothing that will turn the momentum off more than if people want to help [but] they get no answer at the other end of the phone or they don’t know who to phone,” said McCallum.

“There is a momentum today. Whether there will be two weeks from today is something we can’t take for granted, and we have to work on.”

McCallum also said he’s concerned about a “backlash” against refugees if there’s a perception that they are queue jumping ahead of low-income Canadians who’ve waited months or even years for subsidized social housing—something other levels of government have said they need to ensure doesn’t happen.

It’s an opportunity … to re-imagine how we take care of the most marginalized and vulnerable among us.
— Gov. Gen. David Johnston

The minister was also given a better idea later on Dec. 3 of the number of refugees the provinces and territories are prepared to take in through Dec. 31, 2016, saying the numbers could be much higher than expected.

“The number of refugees is likely to be in the order of 35,000 to 50,000,” McCallum said after a face-to-face meeting with several of his provincial counterparts.

“That’s not yet in the official plan, but based on the discussions we’ve been having, it’s likely to be in that order.”

The federal government had already said it expected a mix of government-sponsored and privately-sponsored refugees totalling 25,000 by Feb. 29. But the Liberals promised during the election campaign to bring in 25,000 through government sponsorships.

Living up to that commitment would mean a total of 35,000 refugee resettlements in three dozen cities across the country, at a minimum, said McCallum.

Johnston said he hopes Canadians will extend a “warm welcome” to the many Syrian refugees who will be arriving by the end of February, calling the crisis both a challenge and an opportunity.

If done right, the response to the Syrian refugee crisis could be used as a model for how to deal with future humanitarian situations, said Halifax Mayor Mike Savage, who also took part in the day’s first panel.

“We need to take advantage of this opportunity, not only to take care of this crisis, but to make sure that, on an ongoing basis, that Canada is ready to react to the many crises that are happening … across the world,” he said.

To keep Canadians updated on how well refugees are being settled, McCallum said he and other federal officials will hold weekly briefings on the resettlement project, beginning Wednesday, Dec. 3.

The minister also repeated his plea for private individuals and businesses to step forward and help with housing the refugees, and eventually helping them find jobs.