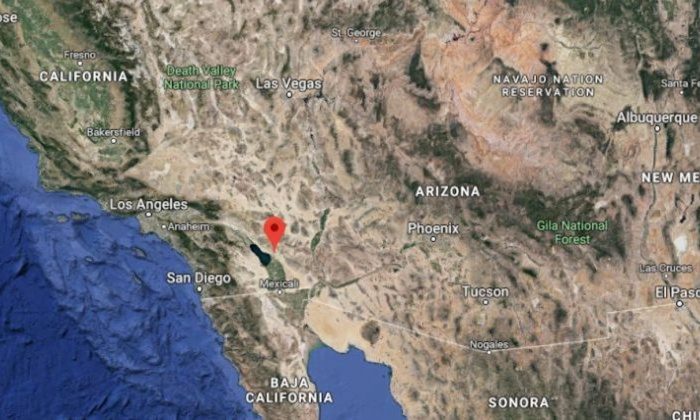 The county declared an emergency over the geyser, KYMA-TV reported in October, adding that officials are trying to prevent the geyser from reaching the Union Pacific tracks and the highway.

The geyser has been in existence since 1953, said an Imperial County fact sheet about the phenomenon. “In the past 11 years, the geyser has moved slowly however recently the rate of movement has increased and has been encroaching on the railroad,” it says. It’s located about a half-mile from Highway 111 and Gillespie Road.

The Los Angeles Times on Nov. 1 reported that recently, the geyser, which is also called a mud pot, moved 60 feet to the west in one day. Prior to that, it had moved 60 feet over a few months.

The spring is located near the southern end of the San Andreas Fault, but it isn’t related to any seismic activity, U.S. Geological Survey geophysicist Ken Hudnut told the Los Angeles Times.

The California Department of Transportation (Caltrans) said it has plans in case the geyser reaches Highway 111.

“Caltrans will have to close state route 111 if that mud pot advances to a point where it impacts the state road. We obviously have to divert traffic,” Caltrans Public Information Officer Ed Joyce told KYMA.

This isn't all that far from our home…..

A Moving Geyser on the San Andreas Fault in California https://t.co/asZxaIrKHg via @weatherchannel

While the geyser can produce dangerous gases, Kelley said that as long as people stay “well away from any of its release, it’s not posing a direct threat to anybody.”

Attempts to stop the geyser haven’t worked, LiveScience noted on Nov. 2. The mud pot slipped beneath an underground wall that was constructed by Union Pacific, and officials also tried draining its water but to no avail.

The spring is acting like a slow-moving sinkhole. It has a depth of 40 feet, LiveScience said.

“It’s a quirky thing,” said David Lynch, a geophysicist, to LiveScience. “If there was no railroad nearby, you wouldn’t even know about it. This would just be something out there chewing out the desert.”

The Seismological Society of America says mud pots and mud volcanoes “are geothermal features produced when water or gas is forced upward through soil and sediments.”

“Mud pots can assume a variety of forms, typically being depressions or enclosed basins containing gas seeps, bubbling water or viscous mud. Mud pots can also be water-laden and appear as bubbling muddy water. Mud volcanoes, on the other hand, are elevated conical structures composed of accumulations of viscous mud extruded from a central vent. They range from finger-sized to several kilometers across, though the largest in the Salton Sea area are about 2 meters high. Small mud volcanoes on land, ranging from one to 10 feet in height, are usually called mud cones or gryphons and are usually associated with volcanic and seismic activity,” it says.

Another Geyser ‘Throws Up’

Meanwhile, a geyser in Yellowstone National Park effectively “threw up” 80 years worth of trash.

“The eruption ejected not only rocks, but also material that had fallen or been thrown into the geyser in years past, like coins, old cans, and other human debris,” it said.

“The last known similar-sized eruption of the spring was in 1957, although smaller eruptions occurred as recently as 2004. As a result of these changes, Yellowstone National Park has closed portions of the boardwalk.”

The Ear Spring geyser activity is not linked to the famed Yellowstone Supevolcano that has drawn clickbait headlines in recent years.