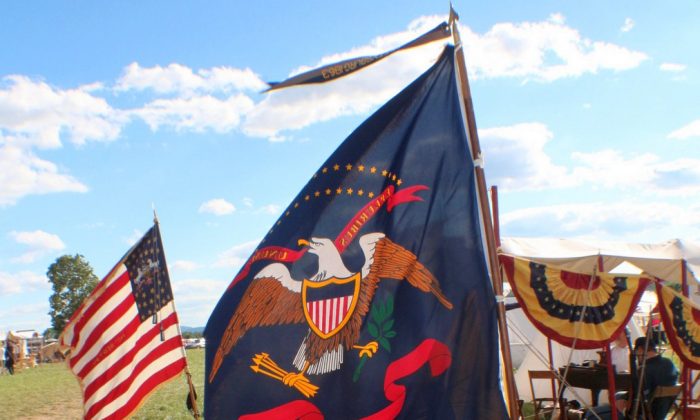 Flags and banners blow in the wind as drum rolls and bugle calls bring reenactors to the field at Gettysnburg, Pennsylvania for the 151st Anniversary of the Civil War battle fought here. (Myriam Moran copyright 2014)
News

It was the battle that turned the tide of the American Civil War. When General Robert E. Lee retreated across the Potomac River, the death knell of the southern cause was sounded. The war would bleed on for two more years. The attempt to invade the north and capture the Pennsylvania capital of Harrisburg failed. The invasion of the rolling hills and farmlands of rural Pennsylvania culminated outside the town of Gettysburg on July 1 to 3, 1863. It was a crossroads, a hub, where farmers toiled in their orchards and fields. A college and Lutheran theological seminary graced the town. It was of no real military importance until two armies converged there on those three hot summer days.

General Lee’s strategy was bold. He knew that the industrial, populous North would eventually win the war. Sheer numbers and industrial might dictated the fate even before the war was begun. Early victories against northern troops he knew were illusory. If he could make a thrust into the northland, capture a major capital and demonstrate the might of the South, then the southern cause had a chance to prevail at the peace table. Only with a major victory on northern soil could northern politicians be brought to the peace table willing to negotiate secession against President Abraham Lincoln’s will to preserve the Union.

This year marks the 151st anniversary of the Battle of Gettysburg. Reenactors arrive with their horses, wagons, uniforms, muskets and tents. People in period dress parade among visitors. Brass bands strike up military tunes on horns that date to the Civil War. Historians describe how things worked, the strategy of the battle, medicine practiced on the battlefield and the intrigue of spies.

“We expect 1,200 too 1,500 reenactors this year. We have a staff of about 150. These events are wonderful and when you have nice weather like this it is very enjoyable,” Andrea DiMartino, the Gettysburg Anniversary Committee’s Media and Public Relations Director said. The weather is splendid. Cool winds blew across the fields, whipping banners and flags, carrying cannon smoke away over the pastures where men and women wearing blue and butternut prepared for their skirmishes.

While landmarks are important and the 150th anniversary of the battle was a mega-event, the beautiful countryside and quaint character of Gettysburg and surrounding Adams County, Pennsylvania offer a unique venue for any reenactment of the battle fought here. It takes place over a long a weekend that runs from morning to night. The venue is on a farm that was chosen to film ‘Gettysburg.’ Each of the days from July 4 to 6, this year are filled with activities.

The 46th Pennsylvania Brass Band dressed in Union blue strikes up music from the Civil War. Resonant sounds from two hundred year old bugles and horns resound as they play ‘The Yellow Rose of Texas,’ ‘Aura Lee,’ and ‘Off of the Grog.’ The band leader enthusiastically explains each song’s origin and picks up a tune herself using a Key bugle made in 1810 to sound the melody ‘Carry Me Back to Old Virginny Shore.’

On the main field of battle a narrator explains the strategy of the first day’s battle and the action at McPherson Ridge. He describes the nine steps to load a Civil War rifle that could be fired two- to three times a minute in skilled hands. In a dramatic moment, as cannons boomed from a ridge, white smoke driving in whips across the field, the narrator told how Pennsylvania General John Reynolds rode his horse out in front of his troops and was shot dead by a Confederate ball that struck him behind his ear. The command was taken over by Abner Doubleday, the man that invented baseball, and the Pennsylvanians fought on.

The narrator described how 29,000 Union soldiers held the Confederates off until reinforcements arrived. That first day of battle the southern troops won victories west and north of Gettysburg and captured 4,000 union soldiers that retreated through the town. As Union reinforcements arrived and became entrenched behind a fishhook formation on high ground, the battle waged. Casualties mounted with eventual toll of 57,000, almost 8,000 dead. The bodies of horses and mules were so numerous that they were dragged into piles and burned. A stream called Plum Run was renamed Bloody Run as wounded all along it bathed their injuries.

As major events unfold on the main field, sloping and wooded in the distance, with plenty of open space for cavalry to charge, sutlers in period tents offer up their wares. Of course there are wooden rifles, kepi hats in blue and gray, junior swords and canteens bearing the label ‘Made in China,’ as well as hand made crafts in wood, fabric and art. A toy maker explains the simpler fun kids enjoyed with wooden toys during the Civil War era. A vocalist with the 2nd South Carolina String Band pumps out the tune ‘If You Want to Have Fun Join the Cavalry.’ Three fiddles mournfully scratch their bows to strike up patriotic tunes of the southern cause. When the first bars of ‘Dixie’ are played the banjo, concertina and guitar begin a stirring rendition of the southern hymn. As the tune advanced the musicians stood. The small gathered crowd sang along with this most popular of songs to come out of the war of secession.

There is plenty of food and plenty of fun. One of the iconic mysteries of our age is the portable, generator powered ATM machine. It stands as a memorial to the cash demand necessary to support families temptations. Grilled pretzels, friend food, home made french fries and chicken, root beer and amazing treats await the palate. Fun and good times as well as interesting historical information await on this field outside Gettysburg, Pennsylvania where three hot days in July changed the fate of America and thus the world.