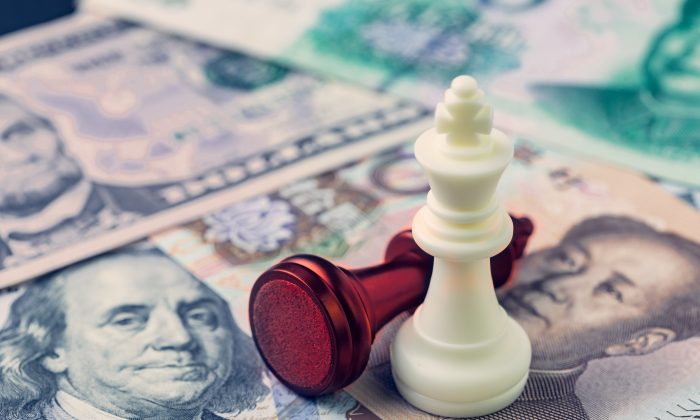 The United States and China represent two strategic pieces of the economic puzzle. Diana Choyleva has a unique perspective on both. (EamesBot/Shutterstock)
By Valentin Schmid

Valentin Schmid
Valentin Schmid is the business editor of the Epoch Times. His areas of expertise include global macroeconomic trends and financial markets, China, and Bitcoin. Before joining the paper in 2012, he worked as a portfolio manager for BNP Paribas in Amsterdam, London, Paris, and Hong Kong.
View profile
biggersmaller
Print

Everybody knows what goes on in the world’s second-largest economy influences everything from supply chains to the U.S. stock markets. But few people understand just how the peculiar combination of a command economy and free markets works, let alone how changes in the Middle Kingdom impact the rest of the world.

Diana Choyleva is different. The Enodo Economics chief economist and former head of research at Lombard Street Research has been covering China since the early 2000s before most analysts started to pay serious attention. Since then she has predicted many of the critical turning points determining the fate of the Chinese economy.

In this interview with The Epoch Times, Mrs. Choyleva shares her insights on how to correctly analyze the Chinese economy and how it impacts the rest of the world.

The Epoch Times: What was your first significant prediction for China?

Diana Choyleva: I started covering China in 2000. I think I got the job because I grew up in another communist country, Bulgaria.

By late 2001 I made the call that it would be a key driver of what was going to happen, because of a different type of cycle relative to the rest of the world that boded very well for commodities.

If you just sat on that commodity call for the next ten years, you would have made a lot of money. And I got the timing of that story ending right as well in 2011. For investors, catching these type of turning points provides the most upside.

Just after I started covering the country, China joined the WTO in 2001. But it continued to control the price of capital as well as electricity, and they had masses of cheap labor. So it was easy to see that they were going to gain export market share like crazy.

Also, it’s a semi-command economy, and Beijing was intent on using China’s domestic savings to industrialize the country. They used the export income to build, build, build. And China was not at all impacted by the dot.com bust in the West.

Those who ignored China at that time were usually late in joining the global commodity bull market.

A Marriage of Convenience?

The Epoch Times: But China profited from favorable terms granted by the United States, right?

Mrs. Choyleva: The U.S.-China relationship was never a marriage of convenience as some were saying at that time. The United States offered an engagement with the WTO entry on the basis of China transforming into a market economy. And then China moved in uninvited by keeping its currency pegged and not liberalizing its markets fast enough.

By 2004/2005 physical energy and transport shortages put the brakes on China’s investment spree.

But they still saved a lot, so they had to export their savings, buying Treasuries, to keep their currency stable against the dollar.

So from a U.S. perspective, all this cheap money was too good to refuse.

The drivers of why the Chinese were willing to do that had nothing to do with free markets, so the Fed could do very little to stop the influx of cheap money.

Then I turned from bullish to bearish and thought these major global imbalances would lead to a financial crisis, as I wrote in a book I co-authored in 2006, “Bill from the China Shop.”

I reasoned that at some point the ability of the United States to borrow and spend would get exhausted, which is what happened. The global financial crisis then pulled the rug from underneath China’s model of development through exports and wasteful investment.

The Epoch Times: What happened after the crisis?

Mrs. Choyleva: The Chinese regime threw money at the economy but the period of strong growth that followed in each cycle got shorter and shorter. They had a stimulus in 2009, 2010; then when inflation came up, they had to tighten. Then growth halved in 2011/2012 relative to what it was before the crisis. And this cycle repeated a few times since then. The stimulus in 2016  produced just one quarter of strong growth. And now the economy’s trend growth is 5 percent at most in real terms.

Not only was the global trade pie not growing at the previous rates. But by 2010/2011 China’s ability to carve out higher market share got extremely constrained. Their wages had gone up, and the exchange rate became overvalued, so China became much less competitive.

The income from exports disappeared, and so the more they wanted to throw money at unproductive investments, the faster their debt to GDP started to increase. And the trade-off between growth and inflation deteriorated.

In 2011 I commented on the China story in my book “The American Phoenix.” At that time if you remember, it was all about how China is doing so much better, while America’s economy is in the doldrums. All the negativity was on America. My analysis said that China would surprise on the downside and America on the upside.

And if you put your money in U.S. equities at that time relative to anything else you would have killed it.

Most people think of me of a China bear. That’s because they started paying attention around 2005 when my colleagues and I started developing the idea that it is the excessive Chinese savings which were the problem.

However, in 2015 when everybody was worried about debt in China, I argued that China had not reached the end of the road yet. You can acknowledge the problem, but you also have to get the right timing as well to gauge the consequences for asset prices.

The Epoch Times: What is going to happen next?

Mrs. Choyleva: And so the next stage of this theme is the fracture of globalization. There is no way the global economic and political order can stay as it is. We are moving to a new digital cold war and a bipolar world—on the one hand China and on the other hand the United States.

Despite joining the WTO, China never became a fully-fledged market economy which the Americans expected. Market forces started playing a bigger role in some domestic markets, but Beijing continues to keep the capital account closed and set the price of capital both regarding the exchange rate and domestic interest rates.

So it remains a semi-command economy and trying to merge it with the market economies of the West, in particular the United States, has not worked.

If you look at the world in the last 20-30 years, a huge number of people were pulled out of poverty and up the income ladder. But we all have our nationalities, and we value our sovereignty and in developing economies these feelings are much stronger. And during those 20-30 years those people who benefited were in China and other emerging economies, and even there, they were concentrated in a few pockets.

On the other hand, a large chunk of the electorate in the Western World felt left behind. Not in absolute terms, but in relative terms.

After the global financial crisis, I got one thing wrong. I expected protectionism to be on the rise but got the timing wrong as it is finally happening now after ten years. I was naïve to expect that a major change in the global status quo would be possible without political change first.  Now, however, there is critical political mass with the election of President Trump and Brexit and the political developments in Europe to lead to a de-globalized world.

This is the big theme that will shape financial markets in the coming years.

The Epoch Times: Why do you have such a unique perspective on China and the world economy?

Mrs. Choyleva: I asked my clients this question, and they answered that I have a unique angle on China because I was born in a communist country and I lived through my formative years in a communist regime, in Bulgaria. So I have an innate understanding of how this central planning system works.

It helps that I am not Chinese either, so I am truly independent of national pride and from the tentacles of the Communist party.

I also don’t mind sticking out of the crowd if I have a firm belief. I tell it how I see it.

Valentin Schmid
Valentin Schmid is the business editor of the Epoch Times. His areas of expertise include global macroeconomic trends and financial markets, China, and Bitcoin. Before joining the paper in 2012, he worked as a portfolio manager for BNP Paribas in Amsterdam, London, Paris, and Hong Kong.