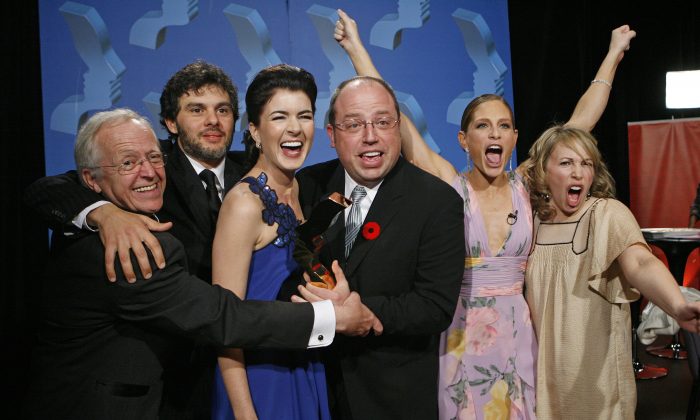 Get Your Fill at ‘Corner Gas: The Movie’

Christmas comes early for fans of the beloved TV show Corner Gas, with Corner Gas: The Movie set to debut across Canada Dec. 3 – 7.

But first, the 90-minute film premieres at Cineplex’s Galaxy Cinemas in Saskatoon on Nov. 24. This is one of the perks offered by the Kickstarter program to involve fans and generate extra funds for contributor perks, special events, and a year of upkeep of the TV and movie set site in Rouleau, Sask., which has become a huge tourist destination for fans.

Philanthropist Bart Hunter’s donation of $8,000 to Kickstarter means he gets the opportunity to host the November premiere in Saskatoon, where he resides. Brent Butt, who plays Brent Leroy, will attend the event, which will be a fundraiser for the Saskatoon City Hospital Foundation and local charities.

Butt and other cast members will also attend the five days of screenings. After its release, the movie it will be shown on network CTV, CTV GO, The Movie Network, TMN GO, and The Comedy Network. The dates are yet to be announced.

Added to this first-of-its-kind marketing for a Canadian feature film will be a collectors’ DVD and a documentary on the making of the movie—which stars the original cast from the TV series—slated for release before the Christmas holidays.

Butt wrote, directed, and starred in all 107 episodes of Corner Gas, Canada’s best loved and most successful TV sitcom which aired from 2004 – 2009. It received six Geminis and various other awards during that time.

The basic premise of the show was to let viewers in on the lives of the characters that inhabited the fictional town of Dog River in rural Saskatchewan. The series and movie were actually shot in Rouleau.

Butt also created, wrote, starred in, and executive-produced the movie, which has all the same characters pulling together to save their town from total financial collapse.

The film had a budget of $8.5 million that was funded by the federal government and Tourism Saskatchewan. The money raised by the Kickstarter program was used to do the things not covered by the movie budget alone.

The goal of the Kickstarter campaign was to raise $100,000 in 30 days. Fan response was immediate and overwhelming: $285,840 was contributed during the campaign—$100,000 of it in just one day. Donations came from all over Canada, the U.S., Australia, Europe, Japan, and Saudi Arabia.

In return, fans were mailed T-shirts, signed copies of the movie script, and DVDs of the original TV show. One American family was allowed to visit the set during shooting of the movie.

At the Toronto International Film Festival in September, CTV set up an eight-foot-high karaoke booth that looked like a prairie grain elevator, in which fans were taped singing the Corner Gas theme song, “Not A Lot Goin’ On.” Other fans were recorded singing the song on the cornergasthemovie.com website.

A compilation of all of the songs will play while the credits roll at the end of the movie. Some of the videos of fans singing will be on the DVD and online, and will also play at the theatres.